Trending
You are at:Home»Laptop Reviews»ASUS Zenbook Prime UX31A – an Ultrabook as Intel imagined it
By Gadgetman on Oct 9, 2012 · Laptop Reviews 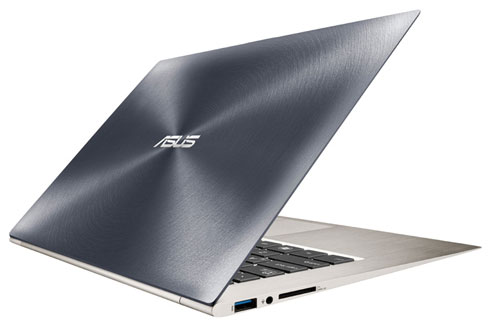 When it came out, the Asus Zenbook UX31 was pretty much the best Ultrabook money could buy – even now, it’s at the top of the list, right along with the MacBook Air (with whom it shares a very similar design and features, for that matter). But time doesn’t stay in one place, and Asus has already released the successor to the popular UX31, the Zenbook Prime UX31A – an Ultrabook that is worthy of both names and is a perfect successor to the first 13 inch Zenbook.

The new Zenbook Prime UX31A looks very similar to its predecessor – it has the same overall design with a radial finish on the lid, ultra-slim all metal construction and tapered front edge. The changes are small, but important, as they make the laptop more practical in everyday use. The first thing you’ll notice when you open the UX31A is the new keyboard – it now has black keys with white text, which is less unique than the previous model’s white finish, but makes it easier to type as the characters are more visible.

Asus has also installed a backlight, which helps a lot in the dark – indeed, its lack on the first UX31 was a pet peeve of many users. The touchpad has also been improved, although it looks pretty much the same as the old one. Other than that, the Zenbook Prime UX31A remains almost identical to its predecessor on the outside.

The hardware is where the biggest changes happened. One of the most important addition to the new Zenbook UX31A is the new 1920×1080 pixels IPS LCD display – this thing is a beauty to behold – it’s way better than the 1600×900 LCD that comes standard on the base model, and definitely worth the extra money.

Other improvements include the new Ivy Bridge processors and 1600 MHz DDR3 RAM – they should definitely come in handy in everyday apps, not to mention that the integrated Intel HD Graphics 4000 GPU is a whole lot better than the IGP on Sandy Bridge (it can run GTA 4 pretty smoothly at low-medium detail levels – and that says a lot). The other hardware features haven’t changed much – the new Zenbook Prime comes with a choice of 128 or 256 GB SSD, a front facing HD camera, Wifi N, Bluetooth 4.0, USB 3.0 and other useful stuff.

Asus is shipping the Zenbook Prime UX31A with Windows 7, which makes sense since Windows 8 still has a couple of months before actually being released. Then again, you wouldn’t need the Windows 8 interface or new features on an Ultrabook, anyway, so Windows 7 is a perfect choice for an OS. There is pretty much no bloatware, which is a good thing – Asus has a reputation to uphold here.

The Zenbook Prime UX31A is already on sale and can be purchased for around $1000 for the base model. That is a very good price, as you might note – Amazon currently has it listed for $1029, but you can easily save more with mail-in rebates and online discounts. If you want the top model, you’ll have to shell out $1495 – the Full HD IPS display, 256 GB SSD and Core i7 processor are worth it, though.