Trending
You are at:Home»Gadget News»Samsung to release smartphone with curved flexible OLED display in October
By Gadgetman on Sep 26, 2013 · Gadget News 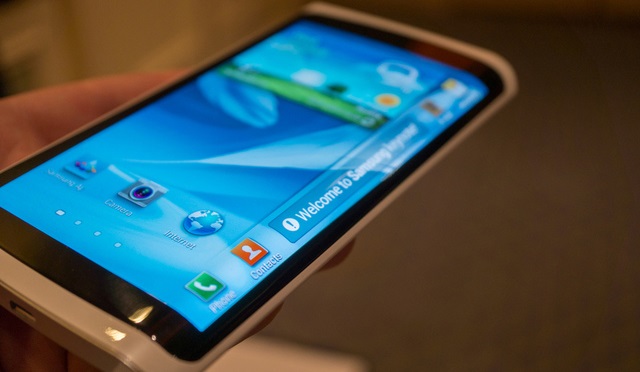 Today at a special event dedicated to Galaxy Gear and Galaxy Note 3, Samsung executives mentioned the company plans to “introduce a curved display smartphone in October,” without unveiling any additional details regarding release date or pricing, and it not even clear what an operating system this gadget will run on.

“We plan to introduce a smartphone with a curved display in South Korea in October”, so we will hear some exciting news from Samsung very soon. And actually, previously released Nexus S has a tiny curve on its screen already, but that’s the curve of the top screen glass and not a curved display.

Recently, the Korean company applied for a smartphone patent where device is curved along its vertical axis. But, we assume that this soon-to-be-released smartphone will offer more than both the Nexus S and Galaxy Nexus had.

In January this year Samsung Electronics presented a video with prototype smartphone, which has a flexible OLED screen and an extendable display from the side of a device. Also, early this year Samsung together with its closest competitor LG Electronics started to sell an extremely expensive (around $9000 for the TV set) TVs with curved OLED screens, so technology is already exists.