Trending
You are at:Home»Gadget News»New Alcatel Tablet Revealed – The Alcatel ONE TOUCH POP 7
By Gadgetman on Oct 28, 2013 · Gadget News 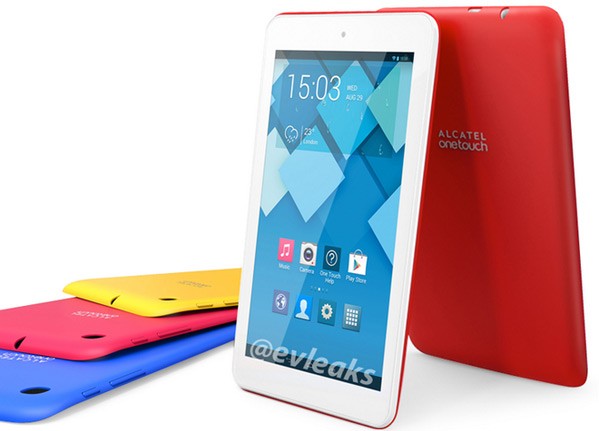 Alcatel are taking the Android smartphone and tablet market by storm. Over the past few months, we’ve seen nothing but more and more upcoming Alcatel releases for all corners of the market, and Alcatel seem to be pushing very hard to make enough devices to suit everybody.

A new device has been previewed by Alcatel called the ONE TOUCH POP 7. The new Alcatel device is a 7 inch tablet which will be available in various different colors.

Along with the previously announced POP C1, POP C3, POP C5, and POP C7 handsets, the TOUCH POP 7 will be the first new Alcatel tablet in the new range of devices from the company.

These new devices have been designed specifically for the budget market, and that means they have fairly weak hardware, and a cheap price point to match.

Although the hardware and specification information hasn’t been released yet for the new Alcatel tablet, it’s likely to have a 1-1.3GHz processor, a 3-5 Megapixel camera and Android 4.2 Jelly Bean, just like the POP C budget handsets.

The new Alcatel tablet will unfortunately not arrive for some time yet though, and it’s important to note that this new information from Alcatel themselves is only preview information, which means everything we now know about it is subject to change.

No matter how big a change the tablet undergoes before its release, it’s likely the device will still be a wallet friendly budget tablet and it will be available in various different block colours.

It will be interesting to see how well Alcatel’s sudden mob of devices will fare in the extremely competitive smartphone market. Right now the only true place left unperfected is the cheap budget end of the market, so perhaps Alcatel is onto something here with their budget range.