Trending
You are at:Home»Android»More Leaks Pour in for HTC M8
By Gadgetman on Jan 7, 2014 · Android 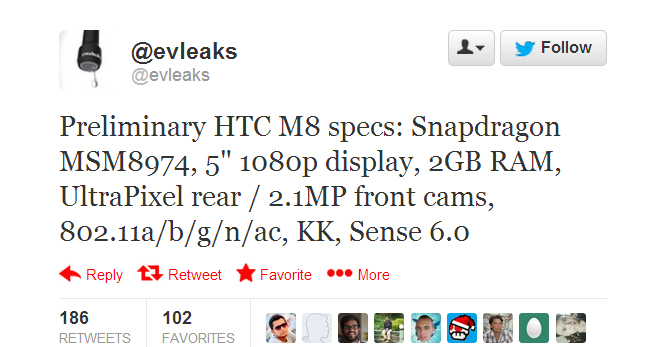 Whether or not the device will actually be called the HTC M8 at this point is currently unknown, we do however have a lot of information to share about the specifications for the upcoming handset.

According to @evleaks, the new HTC M8 will come packed with the Snapdragon MSM8974 processor, a 5 inch 1080P display, 2GB of RAM, an Ultrapixel primary camera, and a 2.1MP front facing camera, as well as Sense 6.0 splashed on top of Android 4.4.2 KitKat in the operating system department.

We’ve known about the 5 inch form factor for a while now, and had previously believed that the HTC M8 would come equipped with a 2.3GHZ Snapdragon 800, and there was almost no doubt about the 1080P display at that point.

However, since then a torrent of leaks and rumors have hit the industry and the new HTC M8 is starting to look severely underpowered. For starters, most flagships this year are potentially going to be using octa-core or pure octa-core processors, or at least the next generation quad core from Snapdragon.

It would be out of place to see a flagship with 2GB RAM in 2014, and although not necessary, the non-2K display screen on the HTC M8 could turn away a lot of customers.

Once again HTC has been caught at the end of a chipset manufacturer cycle, and it’s looking like HTC’s new flagship will suffer greatly because of it.

If it were my choice, I’d wait a few months to redesign the HTC M8 to include better, more advanced hardware to stand a better chance at the market. Any option otherwise would surely only be digging HTC’s grave even further into the ground.