Trending
You are at:Home»gadgets»Stats: iPhone OS is still king of the mobile web space, but Android is nipping at its heels
By Gadgetman on Mar 29, 2010 · gadgets 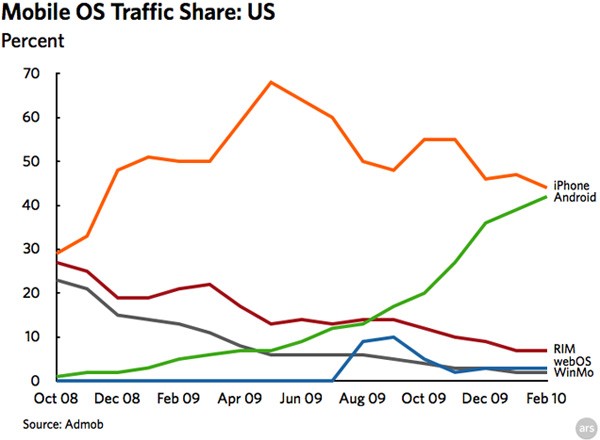 AdMob serves north of 10 billion ads per month to more than 15,000 mobile websites and applications. Thus, although its data is about ad rather than page impressions, it can be taken as a pretty robust indicator of how web usage habits are developing and changing over time. Android is the big standout of its most recent figures, with Google loyalists now constituting a cool 42 percent of AdMob’s smartphone audience in the US. With the EVO 4G and Galaxy S rapidly approaching, we wouldn’t be surprised by the little green droid stealing away the US share crown, at least until Apple counters with its next slice of magical machinery. Looking at the global stage, Android has also recently skipped ahead of Symbian, with a 24 percent share versus 18 percent for the smartphone leader. Together with BlackBerry OS, Symbian is still the predominant operating system in terms of smartphone sales, but it’s interesting to see both falling behind in the field of web or application usage, which is what this metric seeks to measure. Figures from Net Applications (to be found at the TheAppleBlog) and ArcTechnica‘s own mobile user numbers corroborate these findings.