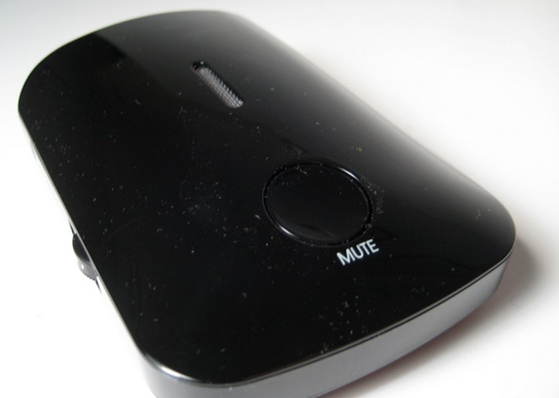 The iRadar Radar Detector may be a useful small device for many drivers who find their feet ‘heavy’ on their gas pedals. Not only may the device save many drivers hefty fines, but it may prevent some from ending up in a prison cell.
Important Note: This device requires an iPhone in order to function.
The majority of standard radar detector devices work out-of-the-box, simply by plugging the power and mounting them to a windshield. Unfortunately, the iRadar Detector is not as simple. The device links with an iPhone via Bluetooth in order to convey a variety of information, such as red light cameras, speed trap locations, the type of radar it is reading and even your vehicle’s voltage output.

The Accessories
In the box a consumer will find the iRadar Detector device, a slim car charger, which comes with a built-in USB port for charging your iPhone, as well as a windshield suction cup mount. 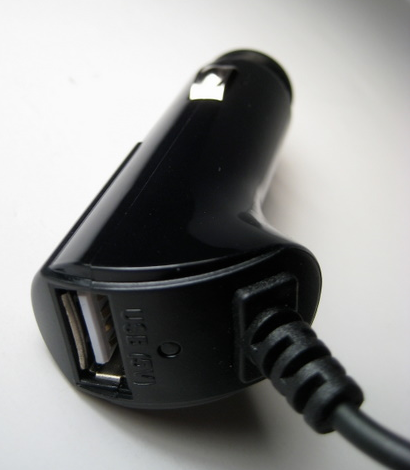 The device measures 1.15 inches deep by 2.92 inches wide by 4.22 inches long. It is around the size of a deck of playing cards and is composed of nearly featureless glossy black plastic.

The iRadar Detector Device does not have a built-in screen, as the display information and some of the processing power is passed to the iPhone.
On the left side of the device, users will find a volume knob, which doubles as a power switch. The device has the capability of going up to a volume of 10, which may be numbingly loud.

On top of the device is a mute button, speaker, and the front portion is adorned with an LED light, which will glow red when the iPhone is disconnected. Once a Bluetooth connection is made with an iPhone it will emit a chime and the LED light will change to blue.

The Cobra iRadar App
The Cobra iRadar App is not a necessity to operate the device, but will vastly increase the radar detector functions. Within the applications’ settings, users will find a myriad of options, which can be used to make changes to various functions, such as auto mute alerts, how the user would like to use the GPS or simply toggle the type of alert. 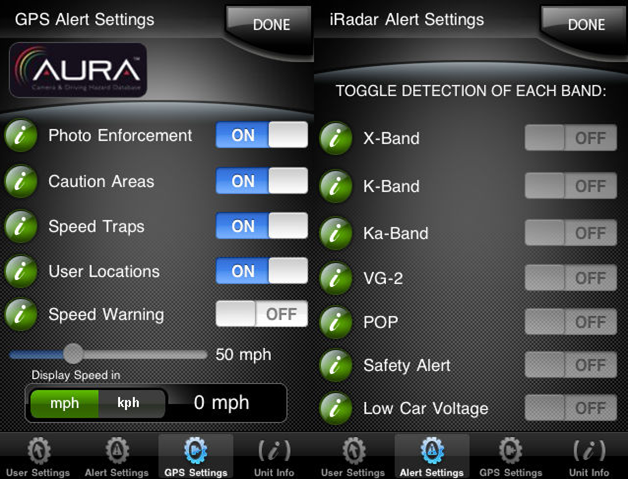 The app also consists of a Dashboard section where users are able to view current speed, the direction in which the vehicle is travelling as well as the vehicle’s battery voltage. In the event a radar is detected, the iPhone will display the type of radar. 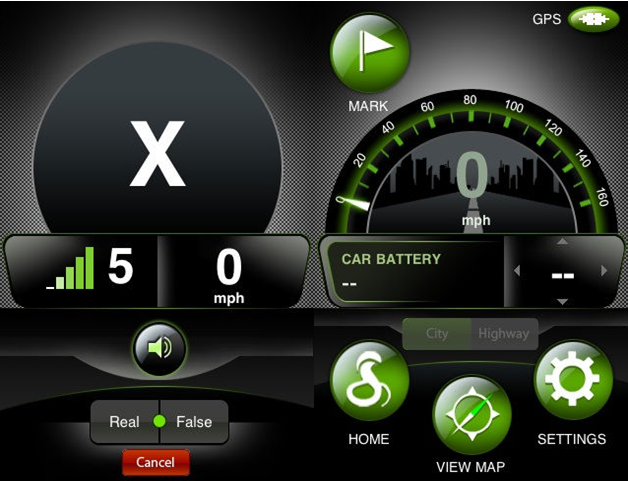 The voltage featured contained within the app may prove to be useful to many users. If the iRadar detects that the voltage of the vehicle has dropped, it will automatically turn off the system in order to prevent the vehicle’s battery from being drained.

The app also provides a map feature where users can view known red light camera locations as well as speed traps in the vicinity. This information is provided by Cobra’s AURA database, which is updated constantly. The map feature will always display your location via Google Maps.

360 Degree Protection
According to Cobra, the iRadar provides 360 degrees protection from both laser and radar guns of all types. It is recommended that the device is mounted on the rear of a vehicle, or at least facing backward to truly achieve 360 degrees coverage.

Practical Testing
The device was tested on a number of occasions by different, independent parties. Overall, the device appeared to perform well. Alerts on red light cameras and speed traps are provided accurately from the AURA database.

Very few false alerts were experienced, while the majority of false alerts are quickly rectified and dismissed by the device.
On one occasion, the device provided an alert on a red light camera, only a few meters after robot and camera was crossed. Luckily, the robot was green.
Our overall experience was positive upon putting the device to the test, and we will highly recommend it to consumers.

Pricing
The iRadar Radar Detection Device currently retails at an amount of $129.99.
A current special is on offer at Amazon.com where the iRadar device is on sale at the low price of just under $90.