Trending
You are at:Home»gadgets»Acer Iconia tablet – can Windows 7 and AMD make a comeback to the mobile market
By Gadgetman on Jan 23, 2011 · gadgets 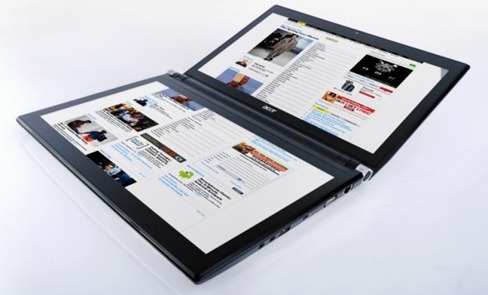 After successfully getting into the netbook market soon after Asus and their EEE PC opened it for the general public, Acer made it very clear that they want to do the same with the new tablets industry, and they have already announced no less than three different tablets running Android, one for each popular size – 10.1, 7 and 4.8 inches, which are supposed to completely replace their netbook lines in the near future. All of them looked pretty good, actually, and we hope that the final products will be even better.

At CES 2011 Acer has also shown off yet another Iconia branded tablet, this time running Windows 7 and more interestingly, the all new AMD Fusion platform, which includes the dual core AMD Bobcat ultra low voltage processor and a powerful (for a mobile device) ATi video graphics adapter. This means that the performance in Windows applications will be superior to any Atom-based netbooks, which are already pretty fast, while not consuming much more power.

But if we judge by all the previous processors from AMD, the Bobcat should still be slower than the new Core i5 ULV processor, even if the latter is running at a much lower frequency. Some actual tests in the near future could prove me wrong, though.

Windows 7 and x86 software on a tablet

Having an x86 tablet can give you quite a lot of advantages over the iPad and Android tablets, most importantly in the software area. There are a lot more great apps for anything you can think of available for this architecture than there are for ARM processors, and most of the times they’re mature enough to feature everything one needs. As an example, take Outlook 2010, Firefox or Photoshop – with a dual core CPU, a good video adapter and fast memory, you can easily run them anytime and anywhere you want, and you’re no longer tied to your power hungry laptop or desktop to use them.

Windows 7 has a lot of features that make it easier to run and use on a tablet, and unlike the iPad or an Android tablet, you can get access to features like using an external hard drive, plugging in a professional audio card for editing (very useful for musicians, of course), using SDXC cards and other things.
But that’s not all – you could easily install Linux if you need it for development, or even Mac OS X – imagine having the full Mac OS X on a tablet the size of the iPad! And it’s not a pipe dream I just thought of – people have been installing Apple’s great OS on netbooks, laptops and desktop PCs ever since they started using the x86 architecture.

Iconia can easily turn into a netbook

One of the defining features of the Iconia Windows 7 tablet is its ability to use the Acer-provided dock and turn into a full netbook with a great keyboard and more battery life than ever. The dock is a simple keyboard with a latch mechanism that holds the tablet itself and you can close and open it just like you would a normal laptop – pretty convenient for when you need to type long texts on the go.

Overall, I think Acer is definitely onto something here – their Android tablets look pretty nice and work well and the Windows 7 model can definitely find quite a few buyers in professional niches. The price for the Ionia Windows 7 tablet is supposed to be around $500-600, which would make it very competitive (dual core power + x86 apps on a tablet – I wouldn’t think twice before getting it) and hopefully they’ll roll it out before something better comes along :-).