Trending
You are at:Home»Apple»Apple iPad vs Herotab M10 – is the clone better than the original ?
By Gadgetman on Jan 25, 2011 · Apple 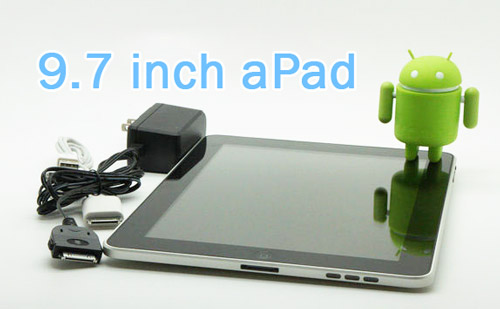 The Apple iPad has revolutionized the way people use computers, while also bringing computing in the lives of people who aren’t very tech-savvy, like children and the older generation, and it has started a whole new market for tablet PCs and slates. While several major brands have released or at least announced their own slates, several Chinese factories have been producing tablet PCs ever since the iPad was out, with most of them being (or at least trying to be) copies of the iPad.

Copyright issues aside, it’s remarkable how close they came to reproducing the iPad in the last few months. The best such “clone” is the Herotab M10, which features quite a lot of great hardware and works almost as well as the iPad, while running Android, which is an open source OS and the main competitor to Apple’s iOS.

The main reason why you would choose an iPad clone over the original is the price, and the Herotab M10 costs $250 less than the iPad, while having 3G, the same performance, support for external USB devices like keyboards, hard drives, flash drives and almost anything else, and of course running the Android OS, which is better than iOS in many ways (for example, you can easily customize the home screen to look however you want).

Performance-wise, both devices should be similar. The iPad has a 1 GHz ARM Cortex A8 CPU with 256 MB of RAM, while the Herotab M10 features a slightly slower Freescale 800 MHz ARM Cortex A8 CPU (i.e. pretty much the same as the iPad) with 512 MB of RAM. So the iPad might be slightly faster in processor-intensive apps, while the M10 will be much better at handling multiple running apps at once (for example, running a game, a browser window and a few apps like Google Maps and a Compass simultaneously can easily take up 256 MB of RAM, while 512 should be more than enough).

The 10 inch screens on both devices are remarkably similar, with the same 4:3 1024×768 resolution and capacitive digitizers. The viewing angles, brightness and contrast are slightly worse on the M10, but only just. The touch control works very well, just like on the iPad, and you have multi-touch, of course.

The M10 has only 2 GB of onboard storage memory, but you can extend it to 32 GB via an SD card slot (not microSD!), and the cards are pretty cheap nowadays (you can buy a 32 GB class 4 card for about $50), so you can have a pretty good equivalent to the iPad for $200 less.

The Herotab is pretty close to the iPad in terms of build quality, with the housing being rock-solid. The size and weight is also pretty much the same. With the M10, you also get support for HDMI output, USB host for connecting external devices, support for 1080p playback, Wifi, 3G, and a 5200 mAh battery, which lasts about as long as the iPad’s 2 batteries.

The bad thing about the M10 is that there is a noticeable lack of support from the factory. They do plan on releasing updates for the OS, and the current 2.2 Froyo works pretty well, but if there’s something wrong with your device, you basically have no one to ask for help except online forums and friends, so if you’re not a tech-savvy person, this device is definitely not a good choice for you.

Otherwise, getting the M10 could actually turn out to be a better deal than the iPad! If you have the skills, you can also overclock the Freescale to 1.2 GHz and more, making the device even faster, and with Android’s marketplace, you’ll never see a lack of good apps for the tablet. If you like the iPad, but can’t afford the price and don’t like the OS or the close platform policy, the Herotab M10 is definitely the cheapest alternative you can get right now. It might really be worth a look if you’re planning on getting a tablet PC!