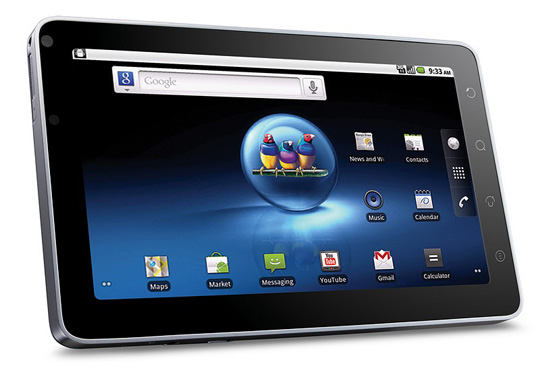 This is one of two Android models launched by the company better known for its screens. The other is a model that dual boots into Windows – and runs awfully slowly as a result.

The ViewPad 7, however, is a very likable Android 2.2 tablet that feels more like a personal organizer. Wrapped in a smart, slip-resistant folio case secured by an elastic strap, the ViewPad 7 accompanied us on several commutes without making us too aware we’d been lugging it around London for a week. It weighs just 375g without the jacket, but 517g with it.

At first glance, ViewSonic could be accused of creating an over sized iPhone 4; in fact, the design is pretty much in line with the flat panel displays it’s been making for years. The familiar blue parrot logo adorns the screen too. We like the fact that it’s widescreen, although the pixel count of just 800×400 is less pleasing. The touch¬screen is responsive enough, but not on a par with the Sony Xperia, Samsung Galaxy S or Apple devices. By default the backlit display turns itself off after just a couple of seconds idle, and with the power switch partly hidden by a clasp it’s not a simple reflex to knock it back into life.

A 3G module is supplied with a contract version; otherwise you’re left with Wi-Fi to get online. We’d have hoped for 802.lln rather than the slower b/g. Bluetooth 2.1 is also supported, and there’s a mini-UDS port for connecting a separate keyboard, speakers and so on. Decent built-in speakers are embedded either side.

The built-in GPS works well with Google Maps – we could see ourselves using the ViewPad as a large satnav. 32GB of internal storage can be supplemented via microSD. The 600MHz processor falls below our expectations and adds to the feeling that you’re paying a lot for a solid but not ground-breaking device.
Even so, we’d be happy to call the ViewPad 7 our own, and could see our¬selves making great use of its video and gaming features – if the price drops a bit.