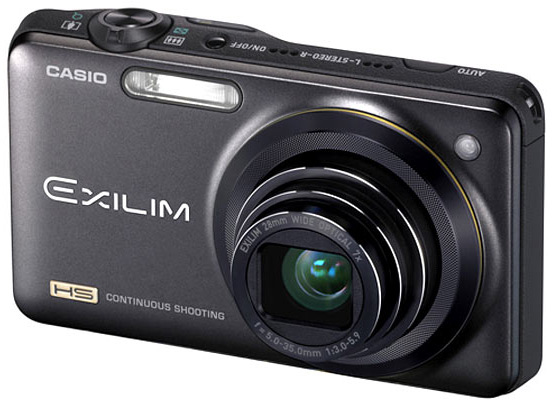 The Casio ZR10 is Casio’s latest high speed and HDR star. Its high speed functions not only let you get shots at 40 frames per second, it also uses those super fast speeds to create HDR (High Dynamic Range) images, where you can see details in the brightest and darkest areas of a scene where they’d normally be washed out.

Little design flourishes add layers to the zrio’s physical attractiveness. The ring surrounding the lens has a textured bezel, and a thin ring surrounding that has a blink and you’ll miss it gold highlight. Instead of a straight top, the ZR10 has a little ridge, with a cut line which goes through the middle and curves down to form a contour that emphasizes the HS (High speed) and shutter buttons. The edges from the front of the camera taper towards its back, leading the eye effectively towards the LCD screen and the all important image.

The Casio’s controls are mostly comfortable, but they feel lacking in cohesiveness. For one, there’s an Auto button on the top left which helps you easily get into it from any other mode, but there’s a further distinction between Auto and Premium Auto mode if Premium is superior like its name implies, why not just make it the one default?

The on screen overlay menu called up by the Set button has blanks actual rectangular, colored blanks besides the other controls like resolution. We wonder why these spaces couldn’t have been used for settings like AF area for one, which you have to go deeper into the Menu to set, and timer mode for another. Lastly, the On/Off button is absurdly tiny, but Casio has cleverly allowed you to switch on the camera by also pressing either the larger Camera or Play buttons.

The Casio ZR10 revealed good camera resolution for its class, coming in at 1400 LPH vertical and horizontal on our test charts. Noise performance was good, you can see it if you pixel peep at ISO100, but the image is relatively clean and sharp until ISO200. At ISO400, image noise starts to eat into clarity, but images at ISO800 still look pretty good viewed on the whole. Photos shot at ISO1600 are noticeably softer with loss of detail, more so at ISO3200.

In HDR mode, the ZR10 takes multiple shots (in 10MP) and combines them into a pleasantly balanced, low contrast photo where you can see most things in the image.

In HDR Art mode, it sharply increases the color saturation and contrast, making everything hyper real and psychedelic. Casio’s HDR mode is remarkably free of ghosting, can be used hand held and we like it quite a lot. We’re not too sure about HDR Art though sure, it’s great for a few laughs but we wouldn’t shoot an entire day with it.

The Casio ZR10 is a little pricey, but has a host of fun modes, good image clarity and an especially useful HDR mode. It could have used some polish in the user interface, but we think compact camera shooters will find themselves pretty satisfied with the little camera.