Ever since digital cameras got small and low power enough to fit inside laptop lids, pens and other small objects, phone manufacturers have been trying to create the perfect camera phone. It started long before “smartphone” became an everyday word, but to this day, we still don’t have a phone that has a compact size, a powerful hardware core AND a camera that’s good enough to actually replace a dedicated point and shoot once and for all.

The best camera phones that you can buy nowadays are the Nokia PureView 808 (great camera, but a bad smartphone powered by Symbian), the Galaxy Camera (a great camera and phone, but has the size of a point and shoot), HTC One and Nokia Lumia 1020 – the latter are the best choices if you want a good smartphone and a decent camera (which is still far from a dedicated unit).

Sony has taken a rather unique approach to the situation – they’ve developed an accessory that contains high quality camera components and uses the smartphone to do the rest of the work. The result is the Cyber-shot QX10 and QX100 duo – effectively two discrete digital cameras that lack a screen, OS and all the hardware which would be necessary for them – instead using the smartphone to replace that.

The so-called lens cameras have a pretty unusual design – a cylinder that houses the lens and zoom/shutter controls – that’s pretty much it. The design reminds of a monocular when extended, and a weird portable cup when the lens is retracted, but really there’s nothing like it so it’s hard to compare. 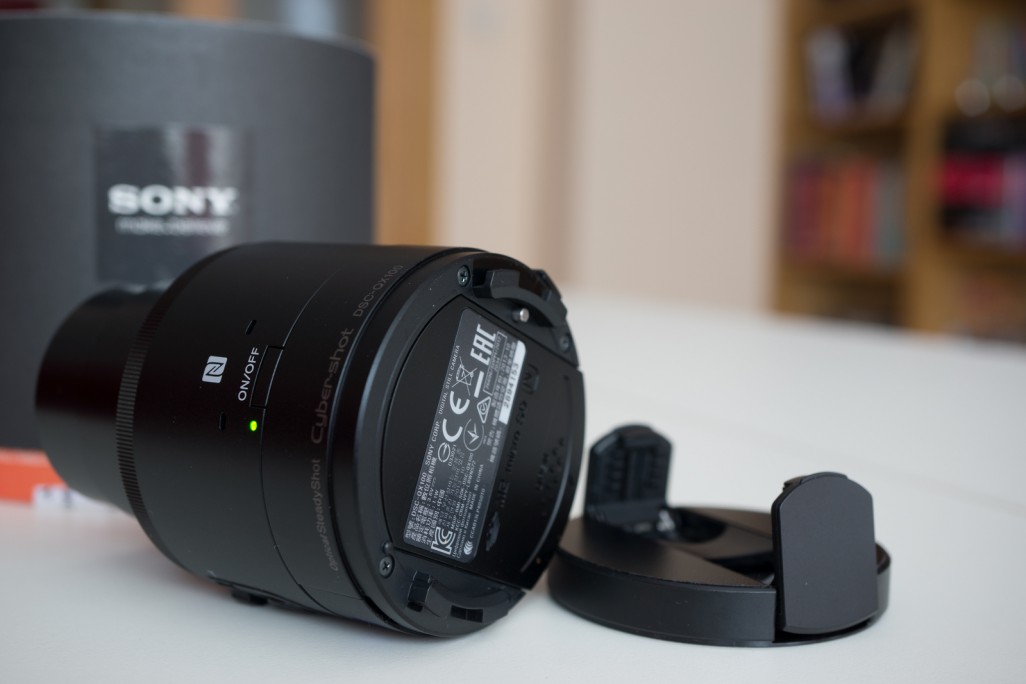 Technically, you can take photos with the device itself, but you’d be shooting blind and have pretty much no control over the settings. That’s why Sony also designed an accessory that lets you attach the lens to the back of a smartphone in order to create this sort of a hybrid camera. 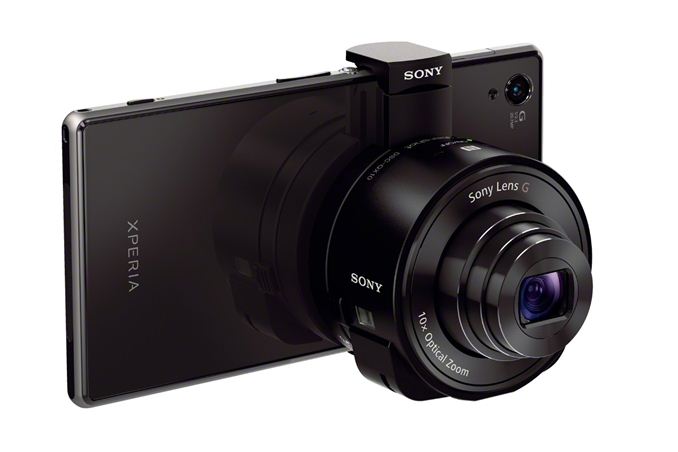 The difference between the QX10 and QX100 is in the internal hardware and the size – the former is quite a bit smaller and lighter, while the latter features some impressive hardware while also being more expensive.

When it comes to the internal hardware, the Cybershot QX100 is on a whole different level than the QX10 – it’s practically a stripped down Cybershot RX10. It’s got the same 1.0 inch COMS sensor with a 20.2 Megapixels effective resolution, giving you a very high picture quality even in low light conditions, and the rest of the specs are nearly as good – the QX100 has a 30-108mm focal length, 3.6x optical zoom, 25 focus points, plenty of manual controls, integrated image stabilization, 5cm macro mode, F1.8/F11 aperture, a 1/2000-8 seconds shutter speed range and more.

The QX10 has a pretty average 1/2.3” sensor with a 18.2 Megapixels effective resolution, so the image quality won’t be quite as good as the QX100, but it will still be on a high level – definitely better than any camera integrated on a smartphone. In fact, it’s the equivalent of the consumer Cybershot WX200 point and shoot. The features include a 25-250mm focal length, 10x optical zoom, 25 focus points, F3.3/F8 aperture, 1/2000-4 seconds shutter speed range and an ISO rating of 100-12800. The optical zoom is quite good for the size of the camera, and if you don’t need the larger sensor of the QX100, the QX10 is definitely a great choice.

When it comes to video, both the QX10 and QX can record Full HD video at 30 FPS, as well as lower resolutions – strangely, they don’t have support for 60 FPS, which the sensor and processor are definitely capable of. The cameras record in MP4 format, so the resulting videos have a good size/quality ratio, although editing it may be slightly difficult depending on which software you like to use.

One thing that may be a drawback for a lot of people is the startup time: both the QX100 and QX10 use NFC for easy pairing and Wifi for communication, and the latter presents a problem if you need to quickly take a shot – unless you’ve already got the smartphone/camera lens set up, it may take up to 20 seconds for the camera to be ready, depending on the phone.

As I already mentioned, the Cybershot QX100 and QX10 are fully controlled through the smartphone, using Sony’s own PlayMemories app. The app looks and works very similar to the default camera app, except it has more features to offer when paired with the lens cameras. Overall, it makes for a good experience, but it’s nowhere near as good as a dedicated point and shoot with the buttons spread ergonomically – using the touch screen exclusively for every single feature gets tiring real fast.

Both the QX10 and QX100 have micro SD and Memory Stick Micro slots and use Wifi and NFC for the connection. There’s also a micro USB port for charging and independent transfer of files to any computer. 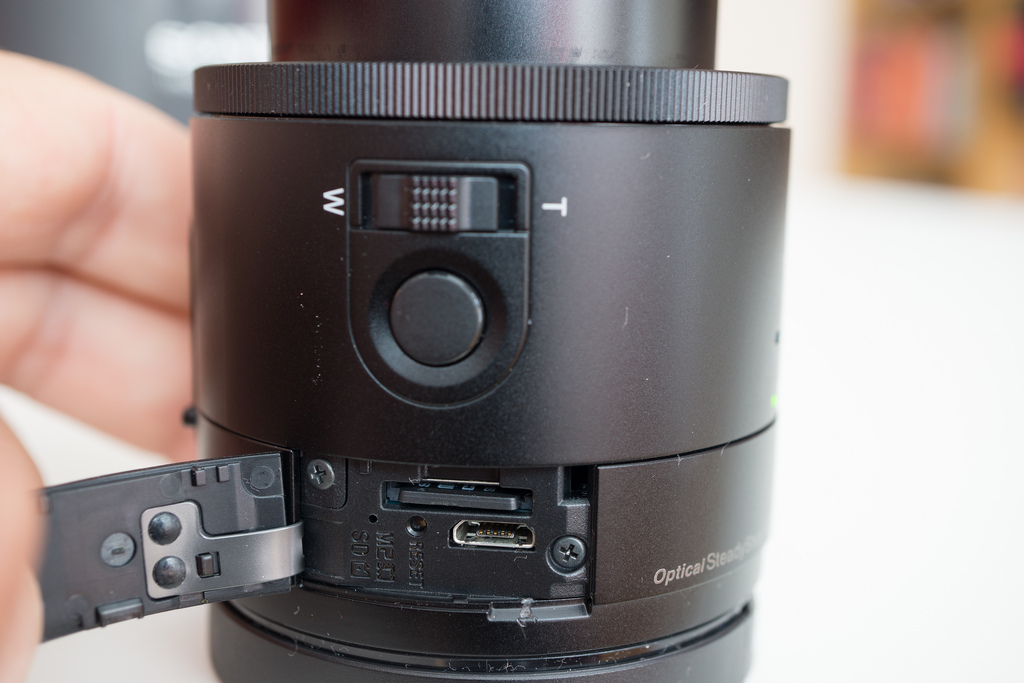 The lens cameras use the same 630 mAh Li-Ion battery pack, which is rated for up to 220 still shots or 65/55 total minutes of video recording for the QX10/QX100, respectively. That’s not anywhere as good as a smartphone – in fact it’s not as good as a lot of point and shoot cameras, so you’ll need to carry a second battery or a charger with you if you plan on using the device a lot.

The Cybershot QX10 and QX100 are already available for sale, retailing for $250 and $450, respectively. The price isn’t high considering the internal hardware (especially for the QX100, which is $300 less than the similar Cybershot RX10 camera), but the fact that you need to use a smartphone and the awkward controls are serious downsides – in the end, the QX10 is the best choice if you want the highest picture quality on the go, while the QX100 offers a high picture quality but is too unwieldy to be a smartphone accessory or a good pro travel camera.