Trending
You are at:Home»Smartphone Reviews»Nokia Lumia 1020 – the phone that promises to finally bridge smartphones and compact digital cameras
By Gadgetman on Sep 1, 2013 · Smartphone Reviews 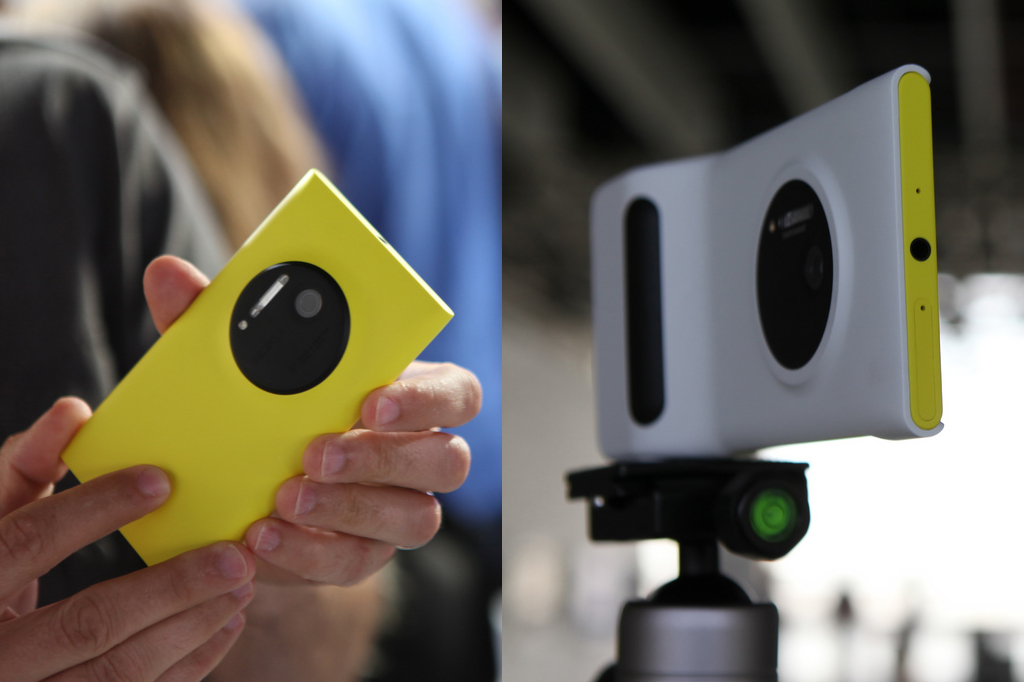 Nokia’s status as a top phone maker is pretty much lost, and even though their Lumia devices are actually great when it comes to the hardware, the choice of Windows Phone as a platform did not win them any points with the users or carriers.

One of the highlights of 2012 was Nokia’s PureView 808 smartphone, which has a very impressive (and large!) camera packing 41 Megapixels on its sensor, which was able to take photos that could rival those of mainstream point and shoot digital cameras, but once again they’ve blown that chance at gaining market share by using Symbian as a platform – quite a weird move considering they had already released several Windows Phone 7 devices, which led many to believe it was a software issue (just like the lack of high resolution support in the first release of Windows Phone 7).

This year, Nokia is back with the same technology in a more compact form and a new and improved smartphone running Windows Phone – the Lumia 1020. Is the PureView camera worth the price of the phone or the switch to a more limited platform if you’re upgrading from an Android phone or an iPhone?

The Nokia Lumia 1020’s design follows in the same footsteps as its predecessor, the Lumia 920, which was the most popular Windows Phone smartphone in 2012 and still is a pretty good phone. In fact, the Lumia 1020 is pretty much a perfected 920 and shares a lot in common when it comes to the hardware, as well. 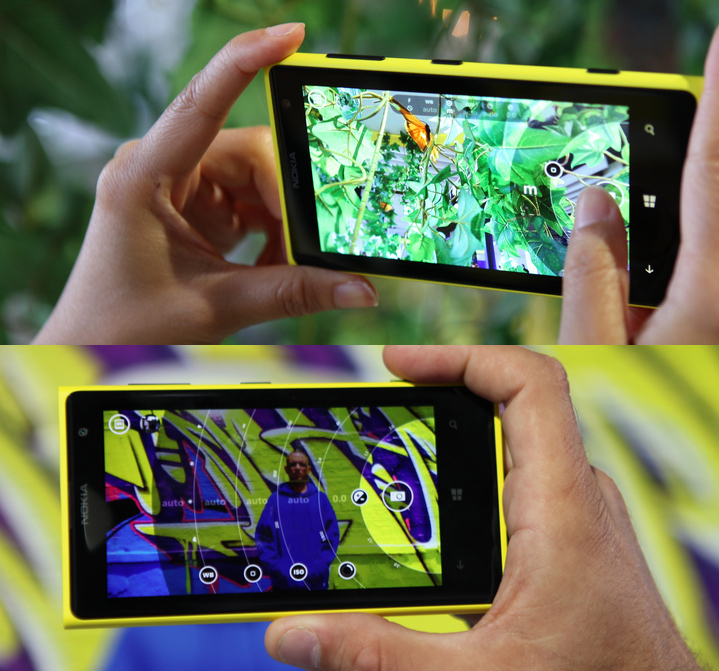 Looking at it from the front, you’ll be forgiven for mistaking it with the Lumia 920, but if you see it from the back, you’ll know it’s the 1020 right away thanks to the large round camera housing, which has the camera lens, an LED flash and a Xenon daylight balanced flash. The Lumia 1020 also lacks the dual speaker grill at the bottom (it’s replaced by a single grill and probably a single speaker) and is overall thinner, except for the protruding camera, which makes the phone appear larger than it is (it’s still 10.4mm at its thickest point, which is slightly thinner than the Lumia 920).

The whole device is made of the same polycarbonate as most of the previous Lumia phones, with a slightly tapered Gorilla glass on the front covering the display and navigation buttons. Overall, the phone is very sturdy and feels great in your hands. The phone comes in three colors – black, white and yellow, all of which look very nice.

The new phone has a 4.5 inch AMOLED display with a 1280×768 pixels resolution, which provides a great image quality, with great colors, excellent brightness and contrast and of course, perfect viewing angles. It may not be Full HD, but it’s still really sharp – you’d have to look really closely to notice the individual pixels. 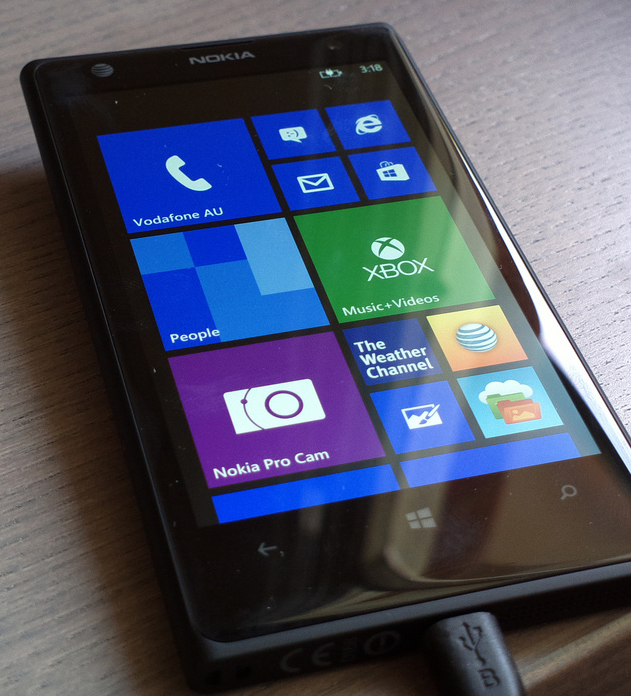 Interestingly, the Nokia Lumia 1020 still uses the same Snapdragon S4 Plus chipset as the Lumia 920 – I guess old habits die hard (Nokia was well known for using very old hardware in their newest Symbian phones), and the phone would’ve benefited from Qualcomm’s improvements in the power usage department that they implemented in the newer Snapdragons. Heck, the Snapdragon 400 running at the same 1.5 GHz would’ve probably added at least an hour of battery life to this phone.

The 2048 MB of RAM are a welcome improvement, though, and even with the Adreno 225 under the hood, the phone manages to impress when it comes to graphics performance (though that’s a merit of Windows Phone 8 itself).

Another issue is the 32 GB of onboard storage space – a real oversight when you consider that it’s a camera phone and I can’t believe that Nokia is making the same mistake as HTC with the One. Only 26 GB are user accessible and even more will be taken up by Windows Phone 8 in no time (it’s used for cache and other purposes) – a micro SD card slot would’ve been really useful, because as it is, you won’t be storing many 38 Megapixel pictures for long, and using SkyDrive isn’t a great option when you have to pay top dollar for your data plan.

Speaking of which, the 41 Megapixel camera really lives up to the hype – it’s better than pretty much anything out there, including HTC’s 4 Ultrapixel shooter (which actually uses a similar technology). The camera takes high quality 5 Megapixel images by default, but there’s a secret: it uses all 38 effective Megapixels to do so, interpolating all of them to form a smaller but higher quality photo. 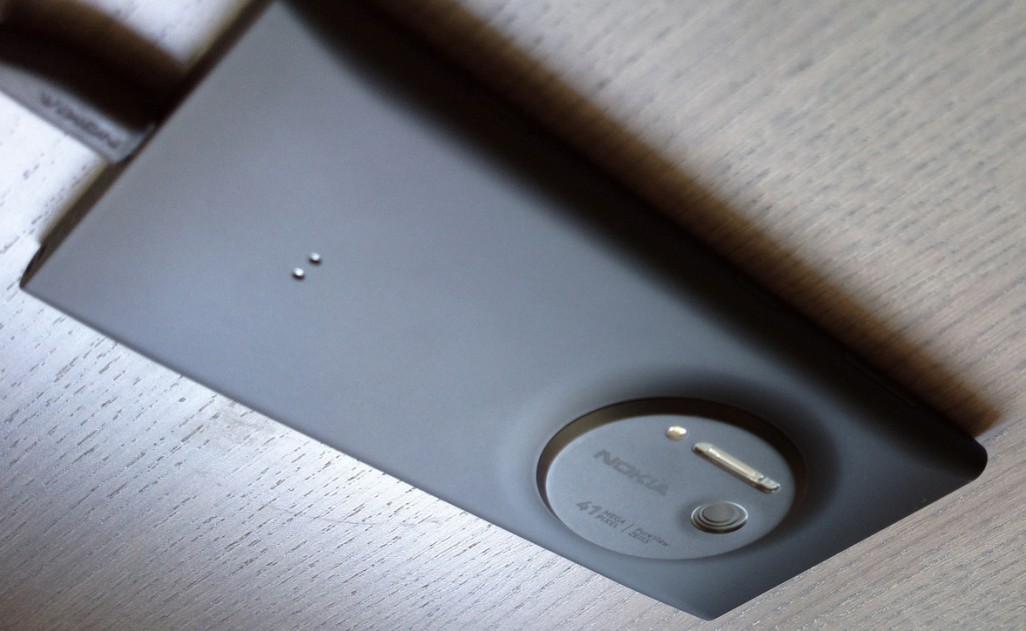 You can also take full size 38 Megapixels photos in 4:3 aspect ratio or 34 Megapixels photos in 16:9 aspect ratio, but those result in a huge file. The Xenon flash does a great job in low light conditions – it’s almost as good as a dedicated camera’s flash. There is no HDMI out on this phone (Windows Phone STILL does not support it!), but you can output anything including real time screen view using the “Play To” app, which is basically a DLNA server.

There’s nothing special about the rest of the hardware: the Lumia 1020 has all the connectivity features you’d expect from a modern phone (except HDMI), including Wifi N, Bluetooth 3.0, GPS, NFC, HSPA+ and LTE, and DLNA. The battery inside is the same 2000 mAh unit that was used in the Lumia 920, only this time it lasts longer, up to 13 hours, thanks to the AMOLED display – however, that’s only if you use it as a phone – if you use the camera and especially Xenon flash a lot, you should expect that number to be way lower.

The Lumia 1020 comes with Windows Phone 8 preinstalled and will receive the Amber update, which was made specifically for Nokia phones. The Amber update brings new camera capabilities for all devices, adds an FM radio app, brings back an improved version of Glance Screen (which lets you display a clock and battery status when the screen is off, and also turn the screen on with a double tap), and more. It’s a worthy update, for sure, but that’s only if you like Windows Phone 8 in the first place.

Windows Phone 8 added quite a few improvements (that should’ve been in Windows Phone 7 in the first place), and while it’s a pretty good OS, it’s still nowhere near Android and iOS. It’s limited by the interface (the tiles get old really quick, plus there is no central notifications location), by the Windows kernel itself, and most importantly by the lack of a lot of great apps that are present on the other two platforms, like Instagram and Vine, for example.

Still, if you’re not a major app user and you find that Windows Phone has everything you need, it’s a nice OS for a smartphone.

The Nokia Lumia 1020 was released a while ago and it still costs $299 on contract and $659 without it – that’s a rather high price that is tough to justify when there are better and cheaper alternatives out there (even the HTC One is $599 unlocked and its camera is close to Nokia’s if you don’t need the Xenon flash). If you absolutely need the best camera on a smartphone and don’t mind Windows Phone 8 and spending a good chunk of money upfront, the Lumia 1020 is worth looking at, but I don’t expect it to be very popular.