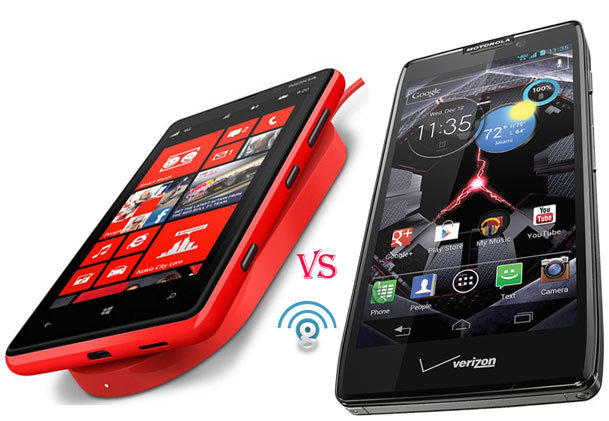 Things are picking up on the smartphone market, with more and more devices being released that are so powerful that they can replace your personal assistant and your laptop altogether. Android is definitely the leader when it comes to the operating system on mobile devices, however iOS isn’t far behind and more importantly, Windows Phone is making a comeback with Windows Phone 8 – a total revamp of the OS and the first real OS from Microsoft after Windows Mobile.

Nokia has a special arrangement with Microsoft for the new OS, and they definitely showed that they can deliver with the Lumia smartphones. For Windows Phone 8, they’ve just announced the Lumia 920 – a high end device that is meant to showcase the full potential of the new OS. So let’s pit it against the also new Motorola Droid RAZR HD and see how it compares to what is one of the top Android phones on the market.

It’s pretty hard to choose between the Nokia Lumia 920 and Motorola Droid RAZR HD if you only look at the external design – the two phones certainly have their own unique style, and they’re both very attractive, so it really depends on your individual taste which one you choose.

The Lumia 920 carries over the design from the Lumia 900, which is a great thing since it’s one of the nicest ones on the market. The unibody polycarbonate housing is sturdy as always, and the glass covering the front just completes the package. The phone comes in matte black and several glossy colors, so you’ll have a hard time choosing between them.

The Droid RAZR HD also improves on the first Droid RAZR, with the main exterior features remaining unchanged. The metal housing with slightly hexagonal corners, Kevlar covered back and Gorilla glass on the front are almost trademarks of the company. The RAZR HD only comes in gray and white, both of which look very good.

The hardware features of the Lumia 920 and Droid RAZR HD are surprisingly similar, although there are certain differences that would make you consider one device over another. First, for the similarities: both phones have the exact same processor, the Qualcomm MSM8960 Snapdragon S4 running at 1.5 GHz and aided by 1024 MB of RAM and the Adreno 225 GPU. This means that you’ll get the same performance on both smartphones, although Windows Phone 8 feels a bit snappier overall. The connectivity options and sensors are pretty much the same on both phones, with Wifi N, Bluetooth, NFC, LTE and other technologies being present on both devices.

Now for the differences. The Droid RAZR HD has a better display – even with ClearBlack technology, Nokia’s 4.5 inch IPS LCD can’t really compare with the 4.7 inch Super AMOLED used by Motorola. While the resolution is the same, the AMOLED just looks better, has better contrast, viewing angles and daylight visibility.

The Nokia Lumia 920 has a better main camera – the 8.7 Megapixel PureView offshoot is one of the best cameras on any smartphone, with the special feature being an optical image stabilizer. The Lumia 920 also has 32 GB of onboard storage space – plenty enough, but the RAZH HD has 16 GB and a micro SD card slot which can be used for expansion in the future. The RAZR HD has a larger 2500 mAh battery, which should translate into better battery life.

Since both the Lumia 920 and the Droid RAZR HD are great smartphones with similar hardware, the software plays a big role when comparing the two devices. Android 4.0.4 has already proven to be an excellent smartphone OS, and 4.1 Jelly Bean that is coming soon to the RAZR HD will be much better. Windows Phone 8 is still unproven, although the polished interface and the new features make it a worthy contender. Still, until it’s actually out and the marketplace gets at least a few thousand apps compatible with the new version, it’ll be hard for it to compete with Android or iOS.

The Motorola Droid RAZR HD will be available sooner than the Nokia Lumia 920, which is coming this November. This puts it at an advantage, since people will be able to buy it sooner. The price will be similar for both smartphones, which leads me to recommend the Droid RAR HD over the Lumia 920 – at least for now, it’s a much better choice.