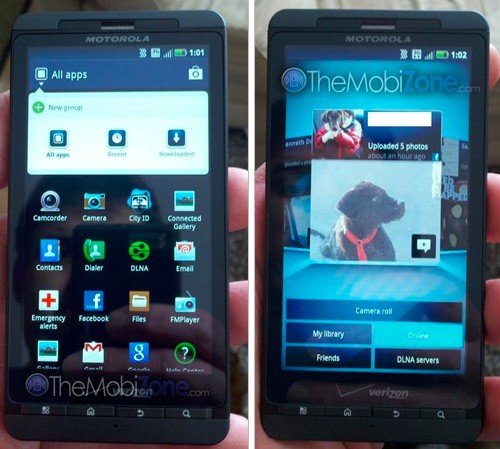 We’ve been hearing rumors of a Motorola Droid X2 for a few days now from The Mobi Zone, complete with specs and pictures (above). Supposedly, it’s the successor to the Droid X, with a similar appearance, Android 2.2 with MOTOBLUR, and the same 8 megapixel camera. Some of the leaked specs — 4.3-inch qHD (960 x 540) display, 1GHz Tegra 2 dual-core CPU, 1GB RAM — didn’t sit well with us, since these closely match the upcoming LTE-equipped Droid Bionic. We did some digging around and one of our trusted sources confirmed that the Droid X 2 aka Droid X “squared” is indeed coming to Verizon in Q2 2011 without LTE. However, it appears to be a refreshed Droid X, with the same 4.3-inch WVGA (854 x 480) display, a 1.2GHz single-core CPU, and 768MB of RAM. It’s not quite the powerhouse it was originally made out to be, but it now seems to be a better fit in the Droid family.