Trending
You are at:Home»gadgets»Palit GeForce GTS 450 review
By Gadgetman on Feb 26, 2011 · gadgets 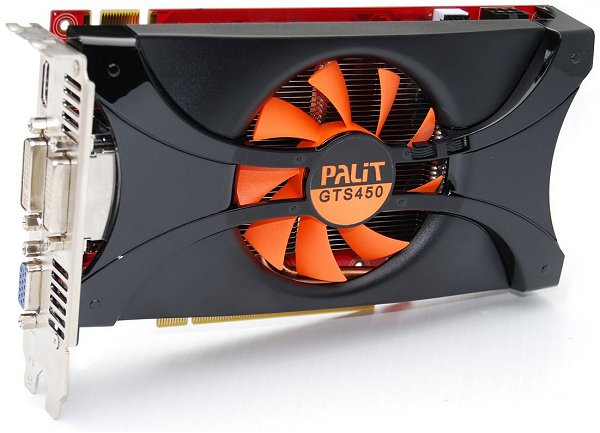 After its solid GeForce GTS 460, it seems like Nvidia is on the right track to dominating the price point that pays the bills— the mainstream and entry-level markets. Their newly released GPU aimed at the budget gamer, or in their own words, the LAN party pwning gamer, is the GeForce GTS 450. Designed to run at mainstream resolutions, namely in 1680×1050 and 1280×1024, the GTS 450 sits squarely at the $120 and $99 price range. Our first review sample of the latest addition to Nvidia Fermi family comes by way of Taiwanese manufacturer Palit.

The Palit GeForce GTS 450 Sonic Overclocking Edition comes in a plain box with little extras. You get the card, an installation CD, quick startup guide and a bit of cable. While the Palit GeForce GTS 450 occupies two PCI-E slots, it’s not much longer than your typical video card. After you plug it in and install the necessary drivers, you’re good to go. In and out in less than five minutes.

The Dxli, on the cheap, is the main selling point of the GTS 450 family of products, so I downloaded BitSquid’s Stone Giant benchmark that has full DXii support. Tessellation is one of the main components of DX11, and with the help of a technique called displacement mapping, results in more realistic graphics. I also ran the Palit GeForce GTS 450 Sonic through Unigine’s Heaven benchmark. And since no amount of benchmarking will ever replicate actual game performance, I tested it with two games.

Running the Pa lit GeForce GTS 450 Sonic with Unigine’s Heaven benchmark in 1920 x 1200 and 4x AA yielded a less-than-impressive 433 score and 17.2 FPS average. Of course, the card wasn’t designed to run in such high resolutions, so I ran it again through the benchmark with a slightly more forgiving 1680 x 1050 resolution on 4x AA and came away with a much better score of 521 with an average of 20.7 FPS. BitSquid’s Stone Giant benchmark ran a bit better, and the card managed a nice 30 FPS average with the resolution set to 1920 x 1200 through the whole run, with the FPS counter only dipping to 20 FPS during the intense parts.

Next on the list is game performance. The Palit GeForce GTS 450 Sonic ran Capcom’s Dead Rising 2 without any problems, with the frame rate never quite dipping below 35 FPS in resolutions at and below 1680 x 1050. It was the same with our multiplayer favorite, Battlefield Bad Company 2. In resolutions of 1680 x 1050 and lower, the card was able to keep up with all the action on the screen, and the frame rate never dipped below 40 FPS.

The Palit GeForce GTS 450 Sonic Overclocking Edition also has the distinction of being overclocked from the factory, but there’s still plenty of headroom for people who like to tinker with their cards and get more speed out of them.