Trending
You are at:Home»Apple»5 amazing iPad apps you should check out today
By Gadgetman on Mar 10, 2011 · Apple 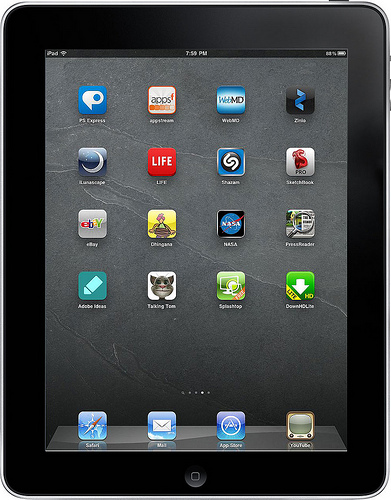 Apple’s iPad is a very successful product, and it has sold over 15 million units in the relatively short amount or time it has been on the market. What makes it so great is the fact that it’s something many have awaited for a long time – a small, portable universal computer that can accomplish any daily computing task.

What lets the iPad do that is the massive amount of apps on the marketplace, currently counting over 300,000 and growing larger every single day. No other device (and more specifically a tablet) has had so many apps from the get go, ever. And now, Apple has released the successor, the in which 2, which looks like it was taken straight from a sci-fi movie – it’s so slim it can easily be mistaken for a closed paper notebook when it’s covered with the protecting cover.

The new tablet will bring even more users to the platform, and of course, more developers, who will create even more amazing apps for people to enjoy. With that in mind, here are just a few of the best iPad apps I think you should check out as soon as you get the chance:

Google Mobile App. Amazingly, you can now get almost all the Google cloud apps in a very nice package on the iPad and iPhone with this app. It includes Google Voice Search, Goggles, Location, Suggest and more – and it certainly makes Android users mad when they see it (unfortunately, it doesn’t include Gmail – that’s a privilege of the Android OS).

TweetDeck. TweetDeck is the best Twitter client out there for the iPad, and the latest version looks better than ever, with its redesigned interface and quick action buttons. You can do anything you want with this app, from posting tweets, pictures and videos (to the service of your choice for the last two) to reading nested and threaded replies and other people’s tweets – there’s nothing missing. You can also sync it with Tweet Deck for your iPhone if you use the service from both devices, which is simply great.

Pandora Radio. Pandora Radio is definitely the most popular music streaming app on any mobile platform, and the latest version for the iPad brings a better interface, support for multitasking (i.e. it runs in the background), faster streaming thanks to a better algorithm and much more. If you like the Pandora service or haven’t tried it before, be sure to get this app and check it out!

Dragon Dictation. The Dragon Naturally Speaking dictation app was the best on Windows computers for a long time, and even now it can compete pretty well with the new Windows 7 Speech Recognition. The iPad is a perfect platform for this app, as without a hardware keyboard (and even with one), it is sometimes much faster to just dictate what you want to type rather than actually type it. Dragon Dictation works perfectly well, though it does need to be trained more for non-English native speakers.

Star Walk. This is the iPad equivalent to Google Sky Map, and in some regards, it’s actually a lot better. You just point it at the sky in any direction and it uses your accelerometer, GPS and Wifi to bring a lot of great information about the stars and constellations (some of them even outlined!) you’re seeing – it’s amazing seeing it at work, really.

If you still haven’t tried the above apps, you definitely should – they’re simply great and can be useful to anyone, regardless of age or occupation. The iPad is a great replacement for a laptop or netbook, and with the right apps, you can definitely use it for more tasks than you could think of. The iTunes marketplace also has a lot of other great apps, and with the release of the iPad 2, their number will only increase!