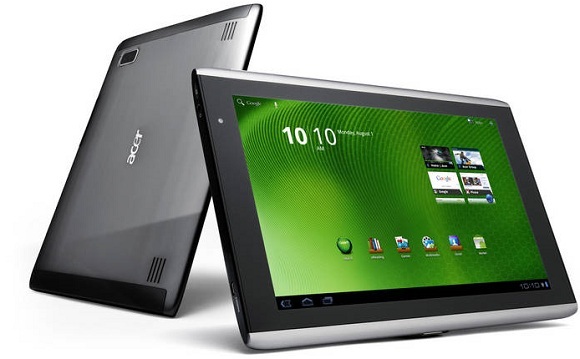 Acer recently announced that it would be entering the Tablet-arena with its Iconia Tab A500. Upon receiving the device for review, we were less than impressed with what the device had on offer. This is why:

Looking at the device, one would realize that it is very portable at only 1.69 pounds and 13.3mm thick. The rounded edges of the A500 makes single-handed reading possible, but the weight may make things more difficult.

The device has been built without any buttons, which allows the user to hold and use it in any orientation. One advantage is that the Iconia Tab has an orientation lock switch on its top edge, which is useful in preventing users from digging through a software menu.

At the top of the device users will also find a volume rocker, which has a nice trick in store for users. The rocker is contextual, meaning the switch will change the volume up or down, depending on how the device is being held. There is also a plastic flap right next to the buttons where a user can add a microSD card. Next to this is a blank space where, we suspect, a telecoms operator would store a SIM slot.

On the left of the device users will find the translucent power button, which incidentally doubles as the charging light. There are also a 3.5mm headphone jack and a mini-HDMI port.

At the bottom of the device is only a docking connector for the optional charging dock with infrared remote. To the right you will find a dedicated power jack and a pair of USB slots. One is a micro-USB, which can be used to transfer data to the tablet, and a full-sized USB port which connects with both storage drives and keyboards right out of the box.

At the back of the tablet you will find a 5-megapixel camera with a single LED flash in the upper-right-hand corner, as well as a pair of stereo speakers along the bottom edge.

Display
The A500 consists of a 10.1-inch, 1280 x 800 TFT LCD display. Unfortunately, this is no IPS screen and fingerprint grease is attracted to the mirror in no time. The display was, however, pretty good on the device.

In our opinion there may be a number of Acer laptops that would wish to have the screen the company has brought to this tablet.

The A500 is powered by a 1GHz dual-core Tegra 2 chip, backed by 1GB of DDR3 RAM, which is likely faster than the DDR2 chips used by some other competitors.

The speed on the A500 can be felt as a user delves through the various functions of the device. It plays 720p videos like a charm, but unfortunately not 1080p.

It handles Android 3.0’s graphically intensive games well, but on occasions we have noticed a decrease in quality.

On a battery test, we were very disappointed with the performance. We played a standard definition video in a loop, with brightness at around 65% and WiFi on. The device only managed to provide around 6 hours 55 minutes of playtime.

The A500 runs on Google’s Honeycomb operating system, which is the latest released by the company. This operating system equips the device with a great browser, Gmail Client, music player, calendar, photo browser, chat and map applications. It also offers the user with access to a large number of Android applications which can be downloaded and installed on the tablet.

The device also ships with a number of Acer Apps, which we found truly useless. All these apps, we found, simply duplicates the functionality of existing Honeycomb apps.

Some of the apps available include LumiRead, Google Books, SocialJogger, TweetDeck, NemoPlayer, MusicA and more.

The A500 consists of two photo-taking cameras, one 2-megapixel webcam at the front of the device and a 5-megapixel camera at the back of the device.
We could not find any good words for the cameras fitted to the device and thought that Acer could have spent more attention to provider better technology. Video quality even seems to worse than that of the still pictures.

We tried recording some video in 720p, but the results could hardly have been called anything near ‘High Definition’.

Well, the A500 is indeed a tablet, and may be available right now if you really do need to get one, but we certainly would not recommend it over the similar competitors out there. While we are under the impression that Acer has a lot to look at in future, rather save your money and try looking at the G-Slate or Asus’ Eee Pad Transformer.