Since BlackBerry announced that it would take part in the tablet-wars and release its own version of a tablet, many people showed excitement, while others showed content. BlackBerry phone users expected a device, which will not fall short of a working device, and indeed they will not be disappointed.

Hardware
The Blackberry PlayBook can be distinguished by its angular edges, dark styling and chrome logo at the back, which adds some flare to the device. The device also boasts the word ‘BlackBerry’ subtly embossed below the display on the front of the device. The device brags with its cool metal chassis, ever so slightly rubberized with the edges squared off.

Despite being only 0.4-inches thick, the device looks and feels solid. At 0.0 pounds, the device is considerably lighter than the iPad 2, but still heavier than the Galaxy Tab.

At the top of the device users will find four buttons. They are the volume up, volume down, play/pause and the small power button. One setback is the fact that the power button is impossible to be located by hand and difficult to activate. This is probably the worse aspect of the device we could find! Users will also notice a 3.5mm headphone jack. 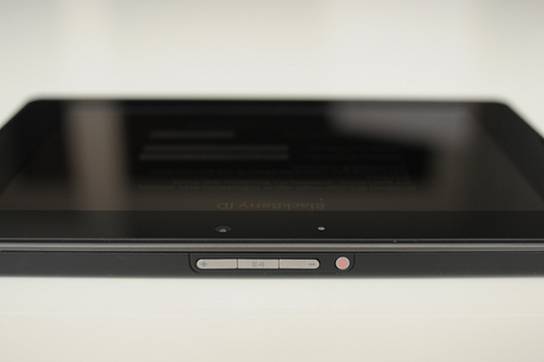 At the bottom of the device, neatly integrated, users will find three ports. The ports include a micro-HDMI, micro-USB and a proprietary three-pong charging connector, which is used when the device is docked. It can also be used with an optional external adapter, which charges at twice the rate of a micro-USB. 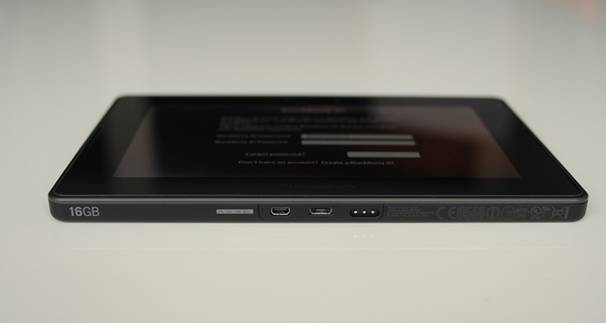 Internals
The BlackBerry Playbook runs on a dual-core, 1GHz TI OMAP processor, which is manipulated by the QNX operating system. This is backed by 1GB of RAM and 16, 32 or 64GB of storage.

The graphics on the Playbook is handled by a Power VR design, which offloads video decoding and gaming acceleration from the processor, enabling the device to decode and display 1080p video over HDMI.

Connectivity
According to reports, there will be a number of various flavors of 4G coming down the pipe for the Playbook later this year, amongst which a WiMAX sampler for Sprint as well as HSPA+ and LTE for other carriers.

The device also supports 802.11a/b/n connectivity, as well as Bluetooth.

Strangely, we found that the device does not support simple USB mass storage. You can, however, mount it as a drive over USB, but you will only have access to a small, read-only volume that contains a single driver. Install that, and the Playbook shows up as a network drive. This same driver allows a user to access the device over a network or connected directly over USB.

Battery Life
Rumors were doing the rounds earlier that the release of the Playbook may have been delayed due to issues with the battery of the device.

Software
The device has a number of capacitive digitizers that recognize a variety of gestures. To switch from one app to another, users can swipe inward from the left or the right, which will pop the app out of full-screen and lets them move forward or back in the queue. A tap will maximize the app of choice. A swipe from the bottom of the screen will give a user an even higher-level view of running apps. Grabbing one and throwing it upwards will send it to the garbage can, or simply tap the tiny ‘x’ that appears next to its name.

Swiping from the top of an app will bring down a context menu and extra controls for the user. Also, swipe in from either top corner of the screen and the user will get a system context menu that displays date, time, simple media controls, battery and connectivity indicators as well as a control for system settings.

Keyboard
Holding the device horizontally, the keys of the onboard keyboard are spread wide, but still accessible by thumbs when the device is held in a user’s hands. Flipped vertically, the keys are even easier to reach, but not as spread as they were. A little more precision will be required from users.

Users will find that neither numbers nor special keys are available without digging into the symbol menu.

Browser
Users will be surprised with a very good browser implemented into the device. Pages generally load fast and are rendered in full desktop mode. Flash Player 10.1 is integrated into the browser and works pretty well too.

Tools
The device comes pre-loaded with a nifty calculator, Adobe Reader and Documents to Go Suite, which allows users to view Office documents. These extras make the device useful for those who need to use the device for more than video and music.

BlackBerry Bridge
The device also comes with BlackBerry Bridge, which is software that allows you to pair your PlayBook up with a phone running BlackBerry OS 5 or 6, which must also be fitted with the Bridge app.

One problem with the Bridge app is that we could not get it to function properly. It crashed every time we tried to use it.

Price
The BlackBerry PlayBook starts with a hefty price tag of $499 for the entry level model. Users may get the device at a better price if they are willing to enter into mobile contracts with providers offering the device as a packaged bundle.

In the End…
The BlackBerry PlayBook is a device that will satisfy the majority of tablet enthusiasts, especially BlackBerry product fanatics. Although the device’s name refers to ‘Play’ the PlayBook would rather suite a more corporative and working environment, rather than a device used as a play-device. All-in-all, the PlayBook did not disappoint and is highly recommended for any person who needs a tablet that could be used for something more than a normal tablet.