Trending
You are at:Home»Tablet Reviews»The G-Slate detailed Review and specs
By Gadgetman on Apr 25, 2011 · Tablet Reviews 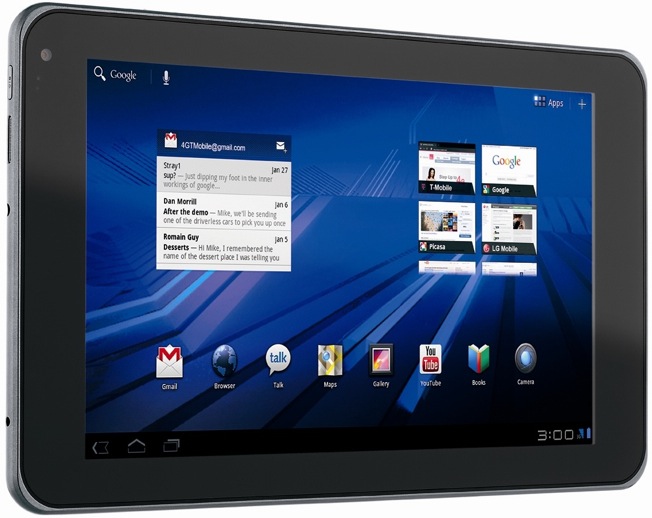 The G-Slate tablet was launched on the 20th of April, exclusively to T-Mobile. With so many tablets on the market to choose from, what will set the G-Slate apart? Or, simply set is aside…

Hardware
Looking at the G-Slate, at first glance, it almost looks like the LG Optimus Pad. For that matter, the majority of tablets almost appear to have the same shape and sizes. It may be only the metal ring around the screen, forming the edge of the chassis with its subtle and silvery hue, which distinguishes it from the rest.

When the device is held in landscape orientation, on the bottom users will find both a micro-USB and HDMI port, as well as six golden contacts, which is intended for a dock.

Around the left side of the device users will find an AC adapter, which is used to charge the device. Users can, however, charge the device over USB, but this process is terribly slow. Here is also a 3.5mm headphone jack, as well as a speaker and, on top, a power button.

Up the top of the device, to the left, is the volume rocker along with a small hole for a central microphone.

Around to the right of the device is the second speaker.

At the back of the device we find all the missing branding. Here users will find the T-Mobile logo at the top and LG on the bottom of the device. A swipe of brushed metal bisects the device with a ‘With Google(TM)’ engraved over it. 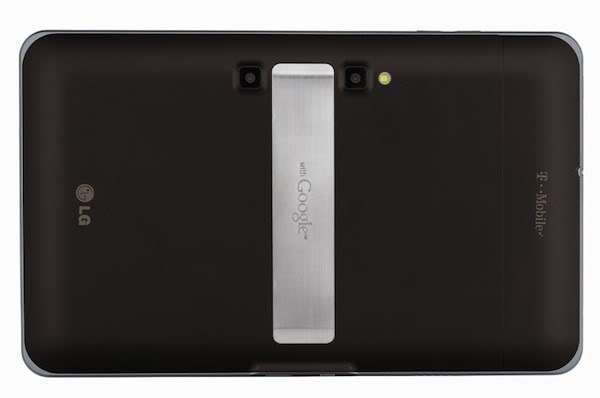 At the back users will also find two HD camera holes, with an LED flash located off to the side of one. Both cameras are 5-megapixel each, with the capabilities of recording 1080p video when using one or 720p when calling on the pair to record in 3D. At the front of the device is a 2-megapixel camera peeking out from behind the glass.

The device weighs in at 1.3lb, making it easier to carry and manage.

Internals
The G-Slate consists of an 8.9-inch, glossy, 1,280 x 768 display. This gives the device a slightly higher pixel density.

Driving the device is a dual-core, 1GHz Tegra 2 processor. This is backed by 32GB of internal storage.

Performance
The device is very responsive when using it or simply browsing. Pages are rendered fast and respond fast to drags, swipes and pinches. The SunSpider browser provides superb browsing experience to users.

In terms of wireless performance, the G-Slate will have an obvious advantage of being a 4G device. The device was tested on the T-Mobile network and often nabbed download speeds of 6.5Mbps and Upload speeds of 2.1Mbps.

Battery Life
The device was tested by looping a video, with WiFi activated and display brightness at about 65%. The device only managed to provide around 8 hours and 20 minutes of battery life. This does not fare well with the 10 hours plus of that of the iPad.

Software
The G-Slate currently runs on Google’s Honeycomb, or Android 3.0. This gives users access to the normal suites of apps from Google.

The device is shipped with QuickOffice HD and also two additional apps, which allows for working with 3D videos. The first is 3DCamcorder and the other 3DPlayer. Users will also receive a pair of red and blue glasses in the box.

Users will also get T-Mobile TV, which provide them with limited television content on the tablet. Unfortunately, quality is quite poor and users will only have 9 channels to choose from. Users also have access to On-Demand content, which is a little better and include shows such as Discovery, A&E and Animal Planet.

Cameras
The G-Slate may come with three cameras, but none of them is particularly good. Although the front-facing camera is fine for video-calling, the two back 5-megapixels disappoint. One would expect a decent amount of grain out of a sensor this size when things are dim, but it is still there even when there is plenty of light.

Unfortunately the 3D cameras do not add much. We would rather have traded the two crummy sensors for a single good one.

Conclusion
The price of the device would appear to linger around $530 with T-Mobile. We just simply think that the price does not justify the device and the performance it has to offer. The only great thing about this tablet is probably Google’s Honeycomb, but that in itself just does not cut the roast!