Trending
You are at:Home»Tablet Reviews»Sony S1 and S2 – these tablets look impressive on paper, but will they deliver? user review
By Gadgetman on May 13, 2011 · Tablet Reviews 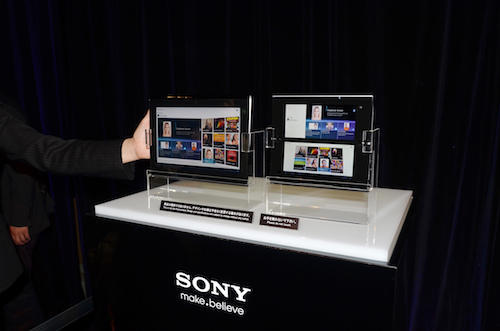 Sony has been in the mobile business for more time than most other companies, having had a lot of ups and downs. Lately, they’ve been producing some pretty good smartphones and ultraportable laptops, but of course, they couldn’t miss the chance to move into the newly formed and rapidly expanding tablet market. Their first attempt at this is with the new S1 and S2 tablets, two pretty different devices aimed at slightly different parts of the market – I guess they’re hoping at least one will work.

S1 has a perfectly sized screen, while the S2 has two of them

The S1 looks pretty much like any other tablet on the market, except for a few differences. It has a nice 9.4 inch display (once again Sony uses their proprietary size, like the 16.4 inch displays on their laptops) and a wedge like shape, which makes the device easier to use on a table and also shifts the weight towards one side, which can actually be more comfortable if you’re holding the device in your hand for a prolonged period of time. Other than these distinctions, there doesn’t seem to be anything special about the S1, but it’s definitely enough to attract attention.

The S2 on the other hand, is much more unique in construction. It’s basically a mini netbook akin to the Sony P series, but a bit smaller, and it has two 5.5 inch displays, each with a resolution of 1024×480, which open and combine to form a bigger display with a pretty good, for such a small size, resolution of 1024×960 pixels. Of course, there’s a small gap between the display, just like on Sprint’s Kyocera Echo, but it’s not that distracting, especially when you’re engrossed in what’s happening on the screen. You can also use it as a netbook, with one screen providing a relatively big virtual keyboard – a great way to take notes and edit documents on the go.

Everything looks great in the hardware department

Both devices have a camera on the back of an unspecified resolution (I hope it’s at least 3 megapixels, they look pretty small on the mockup photos). There’s also support for Wifi N, Bluetooth 3.0, DLNA, 3G or 4G (depends on the network that orders it) and much more. Performance wise, there should be no issues: the S1 and S2 are powered by NVidia’s Tegra 2, which is proven to be fast, reliable and pretty energy effective. Worth noting is the presence of an infrared transmitter meant to be used for controlling other Sony equipment like TVs, recorders and other things.

The software doesn’t disappoint, either

Of course, both tablets are powered by Android 3.0 with a lot of changes in the user interface – you won’t even recognize Android under it. That’s both a good and a bad thing – the good is that the interface and OS is optimized for multimedia and looks pretty cool, with the bad being that Sony needs to provide the software support, a matter at which they’re not very good at.

Both devices are PlayStation Certified, which means they’ll be able to run the games that will be released for the PlayStation Phone and NGP. They both should actually be great at this, the S1 has a big screen, while the S2 can have the controls on one screen and the game on another, though developers will probably have to code that as well.

The price and actual release date are as of yet unspecified, although knowing Sony, they may release them in the third quarter of 2011 at a relatively high price, but if you want style, uniqueness and functionality, the S1 and S2 tablets are definitely worthy of attention.