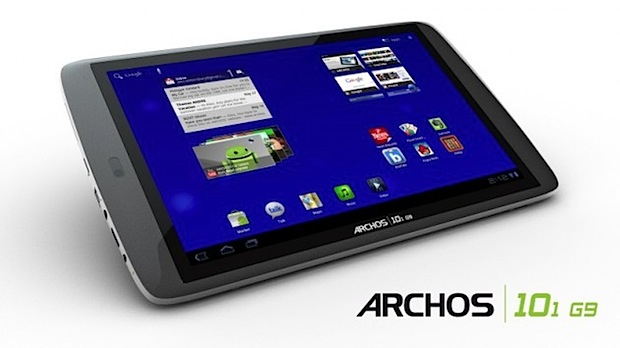 You may already be familiar with the Archos brand if you ever purchased or at least were interested in portable media players – their PMP’s are some of the best in the world, having been around for almost a decade. Archos was actually one of the first companies to start producing Android tablets even before the iPad came to be, although they were focused on playing movies, music and slide showing images (besides there was no Android apps market, either!).

And just a few days ago, Archos has re-entered, you could say, the Android tablets market with a pair of G9 pads, which are also focused on multimedia, but this time, can do so much more than that, thanks to the powerful internal hardware and a mature Android OS. The Archos 80 G9 is a compact tablet that has the performance necessary to do your work anywhere you want, but for entertainment and multimedia, the other model, 101 G9 look far more interesting.

The exterior of the 101 G9 may look unassuming, but this is one of those cases where everything’s not what it seems at a first glance. The 101 G9 has a typical Archos design, with two of the borders being bigger than the other to help the user hold the device better with one or two hands. There are no Android navigation buttons, as Honeycomb 3.1 (which this tablet runs) does not need them. There are two cameras – one on the front for video calls and a bigger one on the back for photos and videos, and that’s about it.

The screen on the 101 G9 is a big and beautiful 10.1 inch unit (it’s in the name, 101=10.1!), with a resolution of 1280×800 that should be enough for any tasks, including watching HD movies. The viewing angles are pretty decent for an LCD display, although it’s certainly no AMOLED or IPS like on the Samsung Galaxy Tab or T-Mobile G-Slate.

The internal hardware is what’s amazing, though: in order to be able to play 1080p Full HD videos in any format without lags, Archos had to use a very powerful chipset, and of course, they went with the best: the 101 G9 is powered by a TI OMAP 4 dual core platform, running at 1.5 GHz (that’s for each processor core!). This makes it the fastest official tablet in the world at the moment, although there will probably be more of them by the time it’s actually released. Texas Instruments stealthy OMAP 4 not only outperforms the 3rd generation Snapdragon and the Tegra 2 at the same frequency, but also consumes less power, being more effective energy-wise.

Obviously, this wouldn’t be much of a portable media player if you could only store 3-4 HD movies (and nothing else!) on it, that’s why Archos also outfitted it with 250 GB of storage space by using Seagate’s Momentus Thin mechanical hard drive, which is only 7 mm in height! Not only is that enough space for a dozen of movies and thousands of photos and music, but it also works faster than any NAND Flash storage space on other tablets (it should achieve at least 2-3 times higher read/write speeds).

If you worry about a spinning hard drive being easily damaged, you should stop: the Momentus Thin can withstand more shock when operational than the 10.1 inch display on the tablet, so you’ll know that the drive may be damaged when you see a crack on the screen :-). However, Archos also offers a basic model with Flash storage as well, for about $100 less.

The 101 G9 also has all the other tech features you’d expect on a great tablet, including Wifi N, Bluetooth, DLNA, HDMI output, and a full sized USB port for connecting external peripherals (like an external hard drive, keyboard, or a 3G data stick for on the go Web access).

Thanks to all of these features, I think the 101 G9 will also be a great purchase for those who want to be able to work on the go and keep all their data always with them, especially when the price will be about $400 – that’s cheaper than the lower-specced iPad 2!