Trending
You are at:Home»Camera Reviews»Panasonic GF3 – a small and to the point Micro Four Thirds dSLR camera
By Gadgetman on Jul 20, 2011 · Camera Reviews 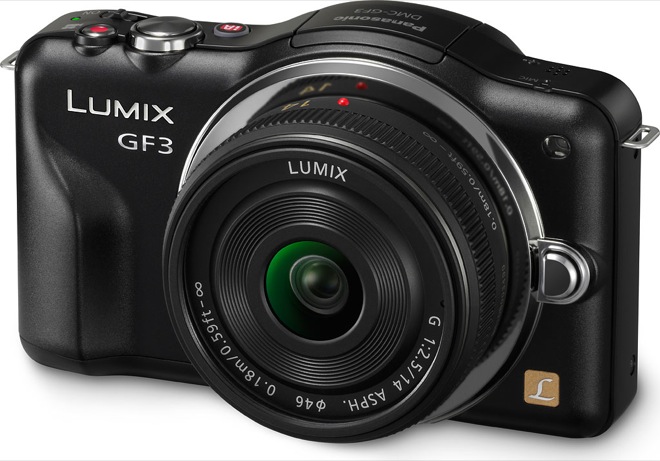 Panasonic’s is really set to bring their Micro Four Thirds standard to the masses, and over the past couple of years they’ve been quite successful in proving that it really has a lot of benefits over the traditional Four Thirds format. One of the most important advantages is that the sensor is receiving all the light directly, which means there is no loss at the mirror and more importantly, the cameras can be made smaller while keeping the same photo quality.

The GH1 and GH2 have proven very successful with professional photographers and videographers – it’s truly the best hybrid camera out there, and it gives them both the ability to carry one device for all their needs, instead of buying two separate and expensive products. But the GH line is still too complicated for those who are new to photography and want to get something simpler that would help them learn all the ins and outs of digital photography before delving into the sea of interchangeable lenses and limitless setting possibilities of professional DSLRs.

And Panasonic has something for that purpose – the GF series! The GF1 and GF2 have proven quite successful, and now they have released the GF3, which also brings a few improvements to the table and is a perfect camera for novice photographers or even professionals that want something simpler and smaller to carry with them every day.

The GF3 looks quite a bit different than its predecessor, the GF2. It has a more rounded housing, with a slight redesign in how the controls are arranged, which makes it more comfortable to hold and use with one or two hands. Sadly, the GF3 does away with the hot shoe (which the GF2 has) – it is replaced by the pop up flash – this will undoubtedly affect those who like to play around with the lighting and other accessories.

The controls are really very simple – unlike the big professional DSLRs and even many point and shoot cameras, the GF3 has only one navigation wheel and four buttons on top – the power on switch, camera shutter button, video button (just press it to instantly start recording) and the iA mode, which sets everything to automatic (and works pretty damn well on Panasonic’s cameras). These are of course the quick controls – you can set other settings in more detail using the 3 inch 460K pixels touch screen, which is also pretty good – it’s bright and has a great color reproduction and contrast ratio.

But unlike the point and shoots, the GF has almost everything that its bigger brothers from the G and GH series have in terms of manual controls over the picture – this is an interchangeable lens camera, after all, and you can easily use it with the small pancake lens that comes in the package, as well as a huge expensive, Four Thirds (with a MFT converter) telephoto lens that are often used by the paparazzi – the flexibility of this camera is just amazing in that regard.

The Panasonic GF3 has the same 12 megapixels CMOS sensor (standard Four Thirds size) as its predecessor, but comes with an improved processing engine, a triple core Venus Engine FHD, which allows it to perform in line with the more expensive professional G-series cameras. For example, the autofocus information is now updated at 120 Hz, making it extremely fast (great for video shooting) and you can shoot up to 4 frames per second at full resolution – the same as the GH2. Filming can be done at 1080i Full HD or 720p resolutions, though with the sensor output being 30 FPS both resolutions should provide about the same quality.

You could say that the GF2 is really a professional camera in the body of a point and shoot, and that’s exactly what makes it attractive – you can use it as your day to day photo/video camera, and you can switch the lens and go pro at any time – the amount of settings and features this camera offers can satisfy almost everyone.