Trending
You are at:Home»Tablet Reviews»Samsung Galaxy Tab 10.1: Always one step ahead – review
By Gadgetman on Jul 14, 2011 · Tablet Reviews 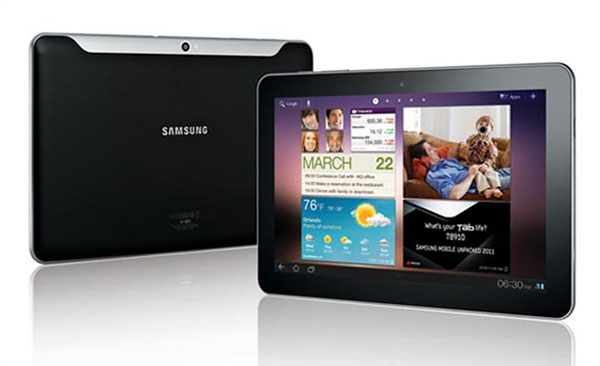 With the release date set somewhere around August, 2011, tech fans everywhere are anxiously waiting for the new Galaxy Tab 10.1, which promises to revolutionize the industry. The high points of this tablet come from its extraordinary light weight and thin design that promises a portability level greater than any other similar product on the market. In fact, if you were to compare it with the iPad 2, you would notice that the Galaxy Tab 10.1 is thinner by approximately 0.2 millimeters, as well as lighter by approximately by 36 grams. However, you should not worry about its processing power, as the increased portability of the Galaxy Tab 10.1 has not been achieved by cutting corners in speed or capacity. In fact, these are also key aspects where this tablet is superior to several other products on the market.

Considering all the features that the Galaxy Tab 10.1 promises to provide, this model will definitely be one of the most competitive Android tablets on the market. One of the amazing things about it is the way that the designers manage to squeeze in such a powerful processor unit and GPU without having to increase the size. Moreover, since it weighs quite a bit less than the current models, your hand will not grow tired easily, a downside all early models had.
However, even though the body of the Galaxy Tab 10.1 is quite small, the display screen is big enough as to provide a quality video watching experience for even the most pretentious users. In addition, the potent battery life makes it a must-have gadget for all people who need to make constant long and boring excursions.

The Galaxy Tab 10.1 does not have any USB, Micro-USB or HDMI port, thus the only way transfer data to it except the wireless is to use the 30 pins docking connector port. However, the manufacturers have stated that it was not in their intention to emphasize the connectivity of the tablet, as the Galaxy Tab 10.1 generation is heading in an alternative direction. In addition, while the browser does offer features which have never before been encountered in a tablet, reviewers say that it could have used a little bit more work.

So far, the features of the Galaxy Tab 10.1 make it one of the most desirable Android tablets and it is actually a serious competitor against Apple’s iPad 2. Nothing bad can be said about the device except the lack of common data transfer ports, but that is quite a minor disadvantage compared to the innovations the Galaxy Tab 10.1 brings.

If you are looking for the state of the art tablets that incorporate the latest technology in a light and highly portable framework, then you need not look further than the Galaxy Tab 10.1. While the value of the tablet is rather high, you can rest assured that it is a performance based gadget that you will not need to replace anytime soon.