Trending
You are at:Home»Tablet Reviews»Samsung Galaxy Tab 8.9 vs the iPad 2 – choosing your next tablet may prove difficult
By Gadgetman on Jul 24, 2011 · Tablet Reviews 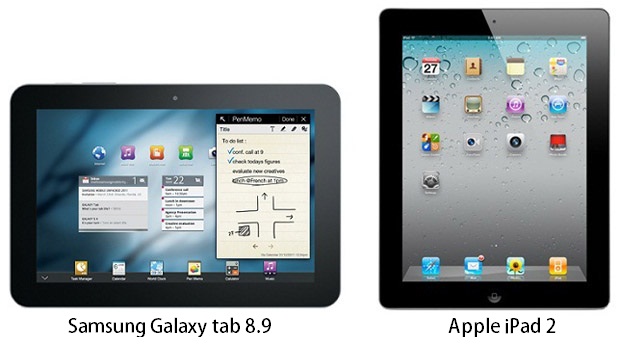 Right after Apple announced the new iPad 2, which is thinner and more powerful than the first model, and also carries two cameras (albeit of a pretty low resolution), Samsung has said that they’ll beat them at their own game and announced the devices that will do it – the new Galaxy Tab 8.9 and 10.1 – yes, that’s how they’re called, so don’t confuse them with the 7 inch Galaxy Tab and the thicker Galaxy Tab 10.1v (obviously, Samsung is running out of names – just look at their new Gravity 3 and 🙂 – yes, the Smiley phone).

The most interesting of the pair is the smaller 8.9 inch model, actually, as it’s much more comfortable to hold and carry around thanks to its size – it’s pretty much a perfect sized tablet, with the screen being still big enough for anything from browsing the Web to watching HD movies.

The Galaxy Tab 8.9 is definitely a great competitor to the iPad 2 and it beats it at its own game in a lot of areas for sure – as a matter of fact, I don’t see why you’d choose the iPad 2 over the GT 8.9, except maybe if you want some apps that are not available on Honeycomb.

On the outside, there’s really not much of a difference between the two: they both have the same pad form factor, with a big screen on the front and basically nothing else. The iPad 2 has an aluminum back panel, which is admittedly very pleasant to the touch, but doesn’t provide much more protection than Samsung’s all plastic exterior, and is the same sturdiness wise (no flexes and creaks on either device). The size and weight is the real reason Samsung says it’s “beating them at their own game” – the Galaxy Tab 8.9 weighs only 470 grams (iPad 2 is 601 grams) thanks to the plastic back and has an incredibly thin 8.6 mm housing that is a whopping 0.2 mm thinner than the iPad’s 8.8 mm :-), though I’m sure you won’t notice the difference in real life.

The iPad 2 has a 9.7 inch 4:3 format IPS display with a resolution of 1024×768 – the exact same one as on the first iPad (an update would’ve been nice), while the Galaxy Tab has an 8.9 wide PLS-TFT (practically the same IPS technology) unit with a bigger resolution of 1280×800, which should make everything crisper and more detailed.

Performance wise, the Galaxy Tab should be a bit faster, as it has the dual core Tegra 2 platform running at 1 GHz and featuring 1 GB of RAM and the powerful GeForce ULV graphics adapter. The iPad 2 has the same ARM Cortex A9 dual core processor, but is limited to only 512 MB RAM and a slightly slower PowerVR SGX graphics solution, although iOS can easily make up for the former, so you’ll only see a noticeable difference when running multiple apps at the same time.

Both devices come in 16/32/64 GB models with and without 3G modems, and both have HDMI out ports and support for HSPA+ speeds on the respective carrier networks. The only other difference is in the software: Android 3.0 looks significantly better than any of the previous versions and Apple’s new iOS – the big simple icons will look archaic after you see the Honeycomb UI, and the multi-tasking capabilities have stepped up a notch, making it the best OS for tablets on the market. The only thing that it needs is for app developers to catch on – there’s still not many apps available for the new user interface.

I’d say that the choice between the Galaxy Tab 8.9 and iPad 2 is easy – the Galaxy Tab wins for me, but if you’re an Apple person, like the interface or the nice aluminum finish, then the iPad 2 might be a better choice for you – just don’t regret it in 2 years when there’s an iPad 4 on the market, and the Galaxy Tab 8.9 is updated to easily compete with it, as well :-).