Trending
You are at:Home»Tablet Reviews»Toshiba AT200 – not the Handibook you were expecting – specs review
By Gadgetman on Sep 29, 2011 · Tablet Reviews 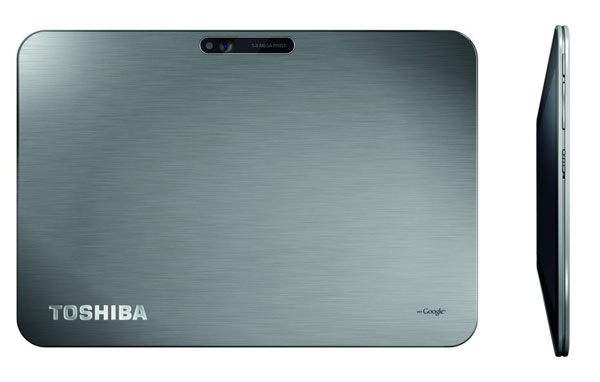 Toshiba’s first entry to the tablet market wasn’t as successful as they maybe though would be – although the Thrive is a pretty good device, with a lot of useful and unique features, its bulk size and design don’t really inspire everyone to buy it and it’s been left for those who can appreciate a full sized USB and HDMI ports, as well as an SD card reader instead of the usual micro SD, and unfortunately, most people aren’t looking for that. The lack of a 3G adapter was also rather weird, however you always have the option of using an external USB one (again, not many people even knew about this).

Anyway, regardless of this initial failure, Toshiba hasn’t given up, and with its new tablet, it actually looks like they can succeed in taking over at least a part of the market, if they do their marketing right, that is. The new AT200 is better than its predecessor in many aspects and is definitely not another “Handibook”, like many people were expecting.

To start with, the AT200 looks pretty damn amazing on the outside: it’s got an aluminum back cover and nice flush screen on the front, with almost no chrome accents (“almost” because Toshiba couldn’t resist adding a ring around the web cam) and it’s as slim and light (in fact, Toshiba claims their device is the lightest 10 inch tablet on market) as Samsung’s Galaxy Tab 10.1, which is its direct competitor along with the iPad 2.

The display seems to be the same 10 inch IPS that is on the Thrive, which is a good thing since it’s a very good screen – the viewing angles are great, and the usual 1280×800 pixels resolution works perfectly to provide the best experience possible.

The Toshiba AT200 runs on a TI OMAP 4430 dual core processor, but for some reason they decided to play it safe and clock it at only 1.2 GHz – lower than most other new tablets, which are running at 1.4-1.6 GHz without any problems. However, that should not affect performance, since it’s still a dual core, and it should actually help minimize power usage in day to day tasks. There’s a full gigabyte of RAM to run any number of apps you want at the same time without lags, so you can easily open 10 tabs in Chrome while listening to music and playing a game in between browsing.

The storage space is much larger than on the Thrive, as well: the new tablet has 64 GB of inbuilt memory, in addition to a micro SD card slot that will accommodate another 16-32 GB should you need them. If you like recording video and shooting photos with your tablet, the 5 megapixels camera on the back will assist you in that, and the 2 megapixels unit on the front can take video calls like the best web cam on laptops.

Sadly, the full sized USB and HDMI ports are now gone, as is the SD card slot. Instead you get the micro SD slot mentioned above and the usual micro USB and micro HDMI out ports – at least they are separate, so you can use them both at the same time. All the other features stay the same: as on the Thrive, there is no 3G modem (and worse, no option for an external one), but you have a Wifi N and Bluetooth 2.1 EDR adapters, which can be more than enough for wireless Internet access if you live in the city or stay around the house with your tablet. There’s no GPS, either – not that you can use it in your car, anyway.

The AT200 runs on Android Honeycomb, as is tradition, and the OS provides everything one may need for the best tablet experience, including the unedited, uncensored version of the original UI – if you don’t like the custom stuff that Samsung and HTC put on their devices, the AT200 will make you happy with its vanilla Android installation.

Being just announced, I’d expect the Toshiba AT200 to be available by the end of the year or beginning of 2012, and although I don’t think it will be as cheap as the previous model, it will still make a great alternative to the iPad and Samsung’s offers.