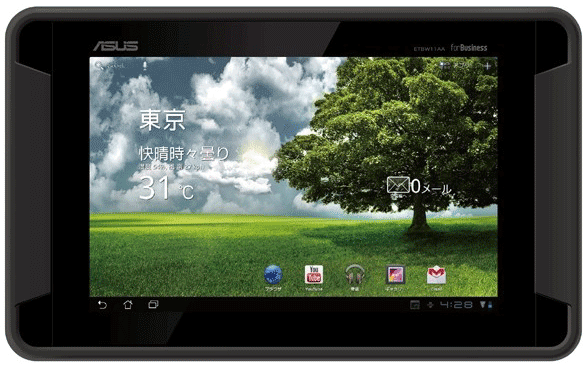 Asus has become quite famous for making high quality and sometimes unorthodox devices, like the Padfone, Transformer and EEE Note, and they’ve pretty much established themselves in the mobile industry as a good smartphones and tablets manufacturer that can deliver and is not afraid of trying out new things.

They’re still searching for their second big thing on the mobile market, after the success of the netbook (the EEE series was the first and most successful netbook series, undefeated to this day), but in the meantime, they’ve been trying their hand at a few very nichey niches, one of which is rugged devices. Their offer for that market is the Asus Tough – you might misread is as “Touch”, but no, it’s “Tough” and yes, it’s a rugged tablet that will withstand more punishment and will work well outside your home or office (as you know the iPad and most other tablets don’t really take kindly to camping with their big glass touch screens).

The Asus Tough looks pretty wicked on the outside: it’s got all the typical features of a device that is built to withstand the elements better than other electronics, including a rubberized exterior shell, with a properly closed body to prevent any dust or particles from getting inside, and a stronger than normal glass on the display, most probably Gorilla glass or something similar. This shell makes the tablet water, dust and shock resistant – you can drive a bike or boat with it and it’s guaranteed to be functional without major damage (like a cracked screen glass) after a 3 feet drop – not bad for a device with a pretty massive 7 inch display that is open to all the elements.

Aside from the rugged design, the Asus Tough is a pretty standard tablet underneath its strong body – it‘s running on Nvidia’s Tegra 2 dual core platform at 1 GHz per core, has 1 GB of RAM and 16 GB of internal storage space, as well as a micro SD card slot for more if you need it. Of course, the usual Wifi, Bluetooth, GPS and compass (obviously, if you need a rugged tablet you’d need those, too), and a WiMAX radio are all inside. The 7 inch display has a resolution of 1280×800 pixels, which is a pretty high DPI for the size. There is no camera, though, which makes little sense since you’d want one to take pictures and video of your travels, and it doesn’t seem like it would break more easily with one than without. Oh, well, I guess we all have to make sacrifices.

If you’re wondering about the software itself, you can stop worrying – the Asus Tough features Android Honeycomb, with everything that’s good about it, starting from the standard interface and ending with the thousands of apps on the marketplace.

Now, the bad news is that the Tough is only available in Japan… yeah, Asus is probably testing the market, but they would’ve definitely done better in the US. I guess we’ll have to wait for them to release it over here and in Europe, as well.