Trending
You are at:Home»Camera Reviews»The GC-PX10 – a confusing camera-camcorder hybrid from JVC – specs review
By Gadgetman on Oct 13, 2011 · Camera Reviews 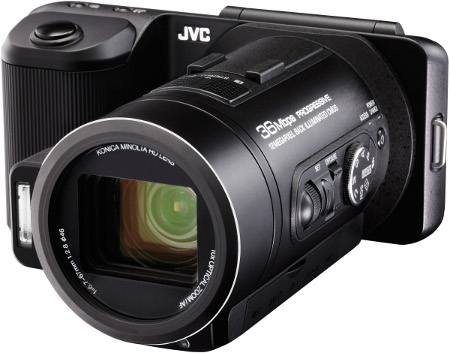 The digital imaging devices market has long been divided between digital photography cameras and digital camcorders for shooting video, leaving those who want to do both things well with the only option of carrying two different devices for both purposes, along with two separate chargers, batteries, lens and other accessories that will make you need a duffel bag to carry them around.

The past two years, however, have seen a renewed interest in hybrid digital cameras, ones that can shoot high quality video while still being able to take excellent photographs with the click of a button. The camera that revolutionized the hybrid form factor was Canon’s EOS 5D Mark 2, which has been used to shoot everything from high quality photo shoots of top celebrities to shooting music videos and even full length movies – it is still regarded as one of the best cameras around, by both videographers and photographers. 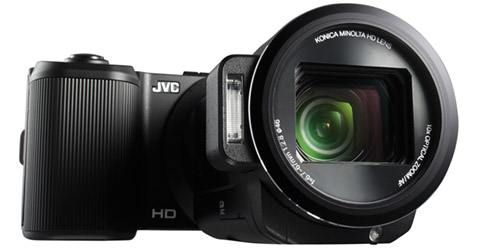 However, other manufacturers want a piece of the action, too, and there have been quite a few attempts at creating an even better hybrid camera, from the Lumix GH1 and GH2 to some less successful products that went down unknown. One of the latest such cameras is the GC-PX10 from JVC, a company well known for their optical and video electronics, but which isn’t that active in the digital cameras market.

The GC-PX10 is actually the successor to a previous hybrid, the JVC GC-PX1, but of course it has been slightly improved. Still, they both share the same confusing form factor of a digital camera back with the handle and shooter release button on the back, just like your average digital camera, as well as a long tube with all the lens and electronics in it, just like your usual handheld camcorder. It looks pretty funky, I’ll say, and I’m sure most people will need to adapt to it for a while, and wonder how the heck they’re supposed to hold the thing when they first take it into their hands.

Well, apparently, you can hold it however you want: as a digital camera, albeit a pretty front heavy one, or as a camcorder by the barrel itself – it’s pretty convenient, actually. You might be wary of breaking “the lens” in the beginning, but soon you’ll be able to get rid of that fear, although I’d recommend you handle other cameras more carefully and not grab them by the lens – most of them do break! 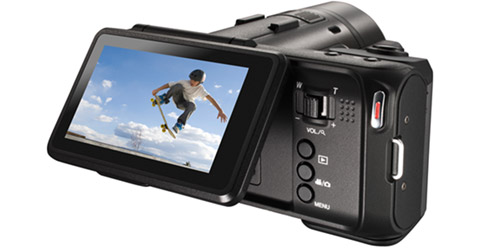 The specs of the GC-PX10 are befitting of a modern digital camera, video or otherwise, with the device having a nice 12 megapixels Falconbird back-illuminated sensor with a 10x zoom that can shoot beautiful photos and Full HD videos at 60 FPS and 36 Mbps, which is great if you want the best quality possible. You also have the options of shooting in slow motion at 300 frames per second and an extremely fast 60 shots per second in burst mode (but only at 3840×2160 pixels, which is about 6 megapixels). There are 32 GB of internal memory, but for long videos or multiple takes, you’ll probably want to use an SDHX or SDXC card to increase that amount to 32, 64 or 128 GB (the last one if you have the money).

All in all, the JVC GC-PX10 is not a bad camera, but the form factor can definitely scare some people away, although once you get used to it, you won’t want to switch to anything else. If you like to shoot video AND take photos, but don’t need an ILC, this could be a great choice for an all-in-one device.