Trending
You are at:Home»Tablet Reviews»Viewsonic ViewPad 10Pro – now you don’t have to decide between Windows and Android
By Gadgetman on Oct 9, 2011 · Tablet Reviews 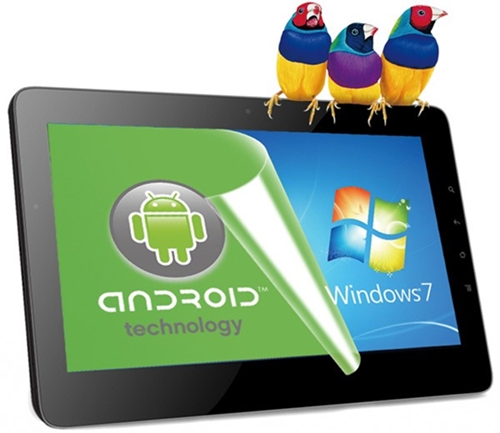 The ViewSonic brand has a lot of history behind it, being most well-known for a lot of high quality CRT and later LCD monitors, but lately they’ve been trying real hard to get into the mobile game as well, announcing and releasing several tablets and even a smartphone, all of which have been unsuccessful.

However, it doesn’t seem like they’ll give up anytime soon, and they might just find their niche if they keep trying. One of their latest prototypes, demonstrated at the IFA this year, is the ViewPad 10Pro tablet – a relatively simple looking 10 inch tablet with some not-so-simple internal hardware and unique features that might interest quite a lot of people.

Let’s get that out of the way, first: The View Pad 10Pro is a Windows tablet, running Windows 7 in this case (although an upgrade to Windows 8 is entirely possible), but it also has a full Android installation running inside the main OS, as well, with all the bells and whistles and features you would expect from it. It’s pretty impressive, actually, as this Gingerbread installation is emulated inside an x86 OS, and while this is no problem for powerful dual and quad core laptop processors, the whole thing must be very optimized to make it smooth on the Intel Atom Z670 SoC, which includes a single core processor running at 1.5 GHz and a GPU running at 400 MHz inside the 10Pro.

This processor, coupled with a full 2 GB of DDR3 RAM and 16 or 32 GB of SSD storage, is more than enough performance-wise for any applications you’ll ever need, even though you might think Windows 7 would slow things down (it doesn’t, really). Office 2010, HD video and Flash playback in your favorite browser, playing a few oldie games – you can easily do it on this tablet. The option of running two of the most popular operating systems on one tablet is very attractive, indeed, and I think the ViewPad 10Pro brings the best of both worlds into one package.

Aside from this point, however, there’s nothing really special about the new ViewSonic product. On the outside, it looks fairly normal, with the usual rounded edges, relatively thick borders and a pretty slim profile at 14.8 mm – it certainly won’t attract any extra attention, and maybe that’s how ViewSonic wants it, being a business device and all.

The 10 inch display is frankly, a disappointment: it has a 1024×600 pixels in resolution, which means that the pixel density is lower than on any other 10 incher on the market. The picture should look OK for most people, however it’ll pale in comparison to the 7 inch Galaxy Tab (which has the same resolution), the Xoom or any other Android tablet on the market (or for that matter, any Windows 7 tablet, as well!).

Other hardware specs include a Wifi and Bluetooth adapters, a 1.3 megapixels camera on the front for video calls (I suppose ViewSonic thought it too weird to include a bigger camera for taking photos on a 10 inch device), and a micro SD card reader that should support up to 64 GB and more memory when cards with that capacity finally come out.

There are also two speakers that provide a loud enough volume for most tasks, a 3.5 mm audio out jack, a mini HDMI out port and a full size USB 2.0 port, which will prove useful no doubt, since Windows 7 supports most USB devices out there and you can connect a vast array of peripherals using an external hub.

ViewSonic is targeting business people and enterprise users with this tablet, and seeing as most of them use Windows on most of their corporate computers, it would make sense to get a tablet that has both legacy support and can run a full mobile OS like Android without issues. With the choice being between the Xoom and the ViewPad 10Pro, for example, I would choose the latter, and I think a lot of companies and people would do the same.