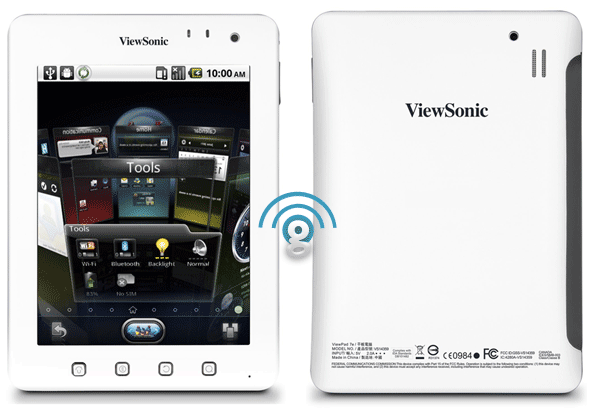 The Android tablets market is still growing exponentially, despite the fact that dozens of devices are already on the market, and a lot of them are reselling for very low subsidized prices. A lot of manufacturers want to get a piece of the pie, which is understandable, and ViewSonic is just one of the many. They have definitely surprised everyone with the dual OS ViewPad 10pro (which runs Windows 7 as well as Android in a virtualized environment on an Intel Atom processor) and the well-built and attractive ViewPad 7x, which also has the processing power to go along with the nice looks.

You may have already noticed that the 10pro and 7x are aimed at the professional and high end consumer niches, respectively, and obviously ViewSonic needed to fill in the void, which they did with the ViewPad 7e – an affordable tablet for the general market and for those who want a fast, reliable and cheap tablet for any needs.

To start with the good points, the new ViewPad 7e uses a pretty fast 1 GHz processor and 512 MB of RAM, which drive the Android Gingerbread OS very well and can run pretty much all of the apps on the marketplace without significant lags or incompatibilities (obviously it doesn’t compare to dual core processors, but nonetheless). The OS itself is the latest version 2.3.4, which is pretty nice, and ViewSonic has implemented their own customizations to the home screen interface – the 3D rotating screens look pretty nice, although they do require the graphics adapter to work pretty hard, which also reduces the battery life considerably.

Other hardware specs include the Wifi adapter (how could one live without it?), Bluetooth adapter, micro USB and 3.5 mm audio ports, GPS, accelerometer and surprisingly, a separate mini HDMI out port, which is capable of HD video output – pretty nice of ViewSonic to include it (other budget tablets don’t have it, obviously, even though the chipset supports the functionality) and not one, but two cameras – one on the front for video calls and one on the back for taking photos (the resolution wasn’t announced, but I’m guessing it’s VGA and 3 megapixels, respectively). I have to say that for the price, you won’t find any other tablet with this kind of extensive functionality.

Now, the only bad thing about the new tablet is the design. I’m not going to complain about the build quality – it’s all made out of plastic, yes, and that feels in your hands, but it’s not going to break apart in normal use and I think it can actually withstand a few drops without problems. No, the design is the problem – more specifically, the four ugly, ugly square buttons right below the screen that are used for navigation but could really use being just removed. Why ViewSonic went with them, I can’t imagine – even four round ones would’ve looked better.

But seriously, judging by the demos, the design is the only problem – I guess we’ll have to wait and see how it performs and holds up in real life use. Until then, however, the ViewPad 7e can easily be recommended as a great budget tablet for those who want to get the most features for the price, and at $199, the price is not bad at all – it makes the ViewPad 7e a great alternative to the Amazon Kindle Fire, as well.