Trending
You are at:Home»Tablet Reviews»Motorola Droid Xyboard 8.2 – the perfect tablet for those who like to work on the go
By Gadgetman on Dec 25, 2011 · Tablet Reviews 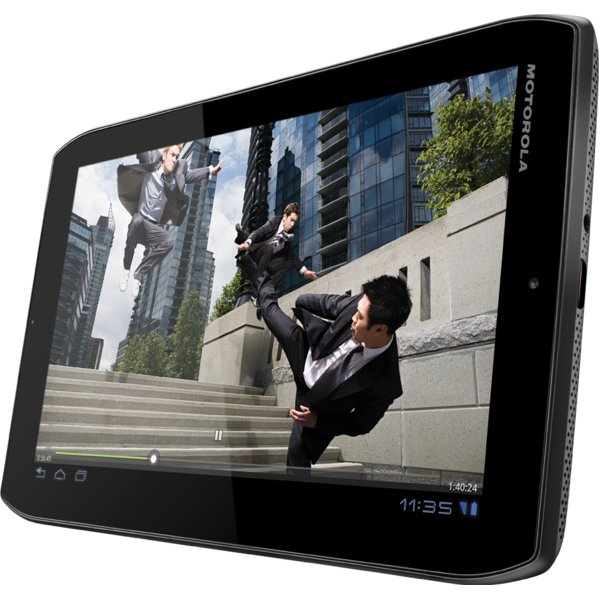 Along with the successor to the Xoom, the Xyboard 10.1, Motorola and Verizon also released a new tablet that is set to compete with all the smaller 7 inch tablets that are currently flooding the market, as well as the Samsung Galaxy Tab 7.7 and 8.9, which are pretty much perfectly sized and had no competition until now.

The Xyboard 8.2 (and by the way the name sounds a lot like “Cyborg”, which kind of makes sense, or they were just alluding to an X-Y chart for the name 🙂 is also a perfectly sized tablet, at 8.2 inches, and it’s a perfect device for those who want a tablet that is both usable and portable, which is a hard balance to strike when it comes to slates.

The new tablet looks pretty much like its bigger brother on the outside – it’s got the same practical design with no frills that won’t attract attention right away, and that makes it perfect for work. The front is covered by a big sheet of Corning’s Gorilla glass, which protects the display from scratches (and it’s pretty good at it). All around the device, there’s a rubbery plastic frame that makes it easy to grab and hold the tablet with one or two hands, and the back cover is just a simple plastic one piece – it’s pretty sturdy and looks like it’s made out of metal, though. The whole slate measures 216x139x8.9 mm and is 386 grams in weight, which makes it one of the thinnest and lightest tablets on the market.

The display is 8.2 inches across, and has a resolution of 1280×800, the same as on the bigger 10.1 inch displays, which means that the pixel density is higher and that makes the picture sharper and clearer. The use of IPS technology means that the viewing angles, the colors and contrast are all great, and the brightness of the LED backlight does not disappoint, either.

The performance of the Xyboard 8.2 is equal to that of the Xyboard 10.1, thanks to the identical TI OMAP 4430 processor that runs inside at 1.2 GHz and uses 1024 MB of RAM to run any and all apps you might have installed at top speed without any lag. The PowerVR SGX540 graphics adapter (the new, overclocked version) is powerful enough to take on any new games and 3D applications, as well.

Pretty much the only drawback that he tablet has is the amount of internal storage space – there is no micro SD card slot, so you’re limited to either 16 or 32 GB of onboard memory, depending on which model you choose (the latter is $100 more expensive, by the way). The other hardware specs are on the same level as most of the other high end tablets – the Xyboard 8.2 has it all, from the usual Wifi, Bluetooth and GPS radios, to the standard selection of sensors and ports, including a separated HDMI and USB ports and a 3.5 mm audio jack.

Just as is the case with the Xyboard 10.1, the Xyboard 8.2 comes with Android Honeycomb pre-installed, and will have an Ice Cream Sandwich update available by the beginning of spring 2012, by the looks of it. Motorola’s customizations do not interfere with the experience, although they could’ve really done without them.

Overall, the Motorola Xyboard 8.2 is a pretty damn good tablet, and the price is equally as enticing. It should be even lower for Christmas, so if you find 10 inch tablets too big and 7 inchers too small, this might be the perfect device for you.