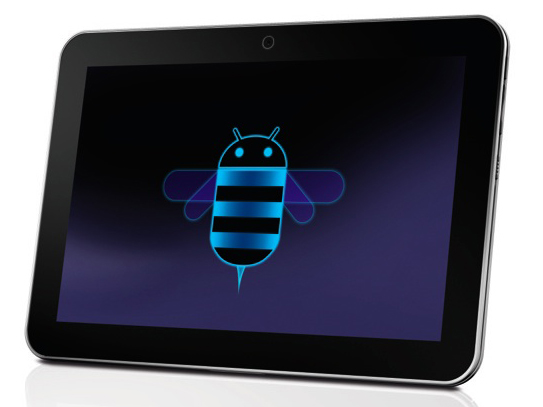 Toshiba has been pretty active on the computer market as of late, having released quite a few successful lines and models of laptops (the Qosmio gaming machine series, for example) and even a very nice and affordable Ultrabook, the Portege Z830. Their entrance to the tablet market wasn’t very successful with the Thrive, even though the slate offered many unique features not found in other tablets.

The company hasn’t given up, though, soon after announcing the 7 inch Thrive 7, which is pretty good, especially since it’s smaller and its thickness is not as much of a problem as it is on the 10 inch model. And just recently, they’ve gotten serious and set for release the Excite, a pretty impressive 10 inch tablet, both visually and specs-wise.

The Excite looks pretty damn impressive, as I already said – the internals are sandwiched between the front glass and a brushed aluminum back, which makes it look professional and elegant at the same time – kind of like the iPad 2, only the design is slightly different. I personally love it, and at 7.7mm, it is also very thin. There’s nothing but the display on the front (plus the hidden front facing camera and sensors) and a 5 megapixels camera with an LED flash on the back.

The 10.1 inch display has the usual 1280×800 pixels resolution, and the viewing angles, colors, brightness and contrast are all great and more than enough for day to day use. It isn’t a Super AMOLED Plus like on the Galaxy Tab 7.7, but it’s definitely on par with the best 10 inchers out there.

The Excite has all the features you would expect from a modern tablet. I already mentioned the 5 megapixels camera, which supports HD video recording, and on the front there’s also a 1.3 megapixels unit for video calls and quick snapshots. There’s also the usual Wifi, Bluetooth and GPS radios, a micro HDMI out port, and a micro SD card slot along with the 16 or 32 GB of internal memory, depending on the variant.

The performance should be good enough for pretty much anything, for the next couple of years, as well, thanks to the dual core TI OMAP 4430 platform, which runs the processor cores at 1.2 GHz and uses the newer PowerVR SGX540 graphics adapter (with a 50% increase in clock speed over the first version). Thanks to it and 1 GB of RAM, you should be able to run any apps you want, at the same time, without any issues or lag.

The Toshiba Excite will be shipping with Android 3.2 Honeycomb, but it will most likely receive an update to Ice Cream Sandwich soon after being released. It’s unknown whether Toshiba will use any customizations – more likely, they will, but it doesn’t matter since you can always replace your launcher on Android.

The tablet will be available starting February 2012, and will supposedly cost around $500 – hopefully the price will go down by the time it actually goes on sale, seeing as the quad core Asus Prime and probably other tablets will be coming by then, as well. In that case, it’ll make a great choice as a light and slim tablet for everyday work and entertainment at a decent price.