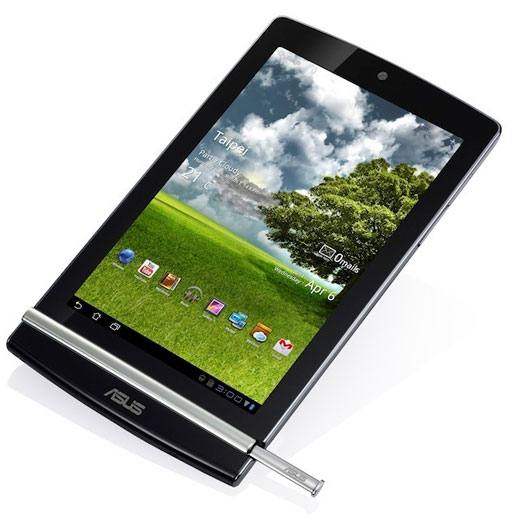 Alongside with the updated Transformer Prime with Full HD display, Asus has also announced a pair of other tablets, which are less powerful but still pretty interesting in their own right. The first one is the EEE Pad MeMO 370T, which is the cheapest quad core to hit the market (it’ll cost under $300 when it comes out) and we’ve talked about it before, and the second one is the MeMO 171 – a 7 inch tablet that comes with a stylus and a housing for it built into the body.

The MeMO 171 has an interesting design – although overall it’s not much different than all the other slates on the market, the chrome tube right below the display does stand out and catches your eye right away. It kind of looks like a retro slate, only it’s thin and light enough not to be one. The back cover has a simple finish, just like the Transformer Prime 700 Series, and the front is covered by a protective sheet of Gorilla glass.

The chrome tube is actually the housing for the stylus, and it fits quite well in the design – you would be hard pressed to tell that there’s something inside it until you pop the pen out. The stylus itself is a pretty standard unit, it sits well in your hand and is relatively accurate, although you won’t win any calligraphy prizes using it on the tablet’s display. It’s good to see companies warming up to styli once again – they definitely have their uses and it would be stupid to shun them just because they don’t fit in the new “touch” world.

The screen on the EEE Pad MeMO 171 is a respectable 7 inch IPS unit with a resolution of 1280×800 pixels and near perfect 178 degrees viewing angles – in line with most of the other mid-range tablets and more than you’ll ever need on such a small device.

You sure won’t have any problems with the performance, either – the MeMO 171 is powered by a dual core Qualcomm Snapdragon 8260, running at 1.2 GHz and featuring the new Adreno 220 graphics adapter – this SoC can easily power through anything you can throw at it, and the 1 GB of RAM will keep things smooth and fast even when you have a ton of apps running in the background.

The tablet will be shipping in two models – with 32 GB and 16 GB onboard, but thankfully, there’s an easily accessible micro SD card slot on the side that lets you easily upgrade the amount of memory you have by up to 32 GB more. Right along with the micro SD card slot, there’s a SIM card slot for the 3G modem, and at the bottom of the device, you’ll find the 3.5 mm audio jack, micro USB port and mini HDMI out port – yes, Asus has gone all out on this tablet, and that’s great for the end users.

The other specs are in line with what you’ll find on the competition –there’s a 5 megapixels camera with support for 720p video recording on the back, as well as a front facing 1.3 megapixels unit for video chat, the usual Wifi, Bluetooth and GPS radios, DLNA support, a big 4400 mAh battery with an 8.5 hours lifetime, and the standard selection of sensors for a tablet. All of that fits inside a 12.95mm thick device that weighs 400 grams – a bit on the thick side, but still within acceptable limits.

There’s no word on the pricing, but Asus said this will be a budget mid-range tablet, so we should expect it to cost under $400 and less with a contract. A pretty good deal, especially considering that the stylus alone usually costs around $70.