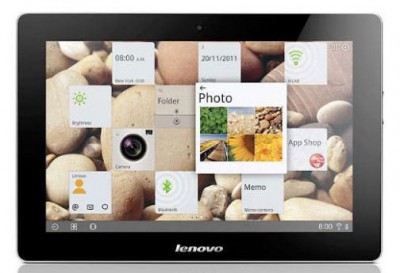 Lenovo is slowly but surely moving into tablet territory, and while their first try wasn’t as successful as some expected (although the ThinkPad and IdeaPad tablets are simply great when it comes to quality and performance), they’re going at it again this year, and it looks like they’ve learned from their mistakes.

Along with the IdeaPad S2, which is practically a direct competitor to the Asus Transformer Prime with its new SoC and keyboard dock, Lenovo has also announced the IdeaTab K2 – a sort of prosumer-oriented tablet that has all the features you can think of and more, as well as the good old Lenovo build quality.

The design of the IdeaPad K2 stands out from the crowd – the front is adorned by the 10.1 inch display, as well as two grilled pillars on the sides that look like speaker grills… and indeed, they are! There are two speakers under each grill, making the K2 the tablet with the best sound – the four speakers can provide enough volume for watching movies and listening to music, and their position in the front means that you’ll also get a good stereo/3D picture – it’s a wonder other companies haven’t thought of this before.

The display is also great – it’s an IPS unit with a resolution of 1920×1200 pixels, which is the highest on the market and it makes the picture sharp, clear and a joy to look at. The brightness of the LED backlight is also more than enough to use the tablet in any conditions, even direct sunlight outdoors.

The back of the tablet has a brushed metal finish, although the cover itself is made of plastic, but the frame of the device is metal inside and out, and it makes it look professional, as well as making it pretty thin at 9.8mm.

The performance of the tablet is also the highest in class thanks to the new Tegra 3 quad core SoC, with the processor cores running at 1.3 GHz each (and probably easily overclockable to 1.5-1.7 GHz in the future), and the new GeForce GPU being 3 times as fast in 3D apps as the previous version, according to NVidia. There’s also 1 GB of DDR2 memory running in dual channel mode for the highest performance in intensive tasks and when running multiple apps at the same time.

Everything’s alright with the other hardware features, as well: besides the usual Wifi N, Bluetooth and GPS radios combo, there’s a micro USB port, a micro HDMI out port, a 3.5 mm audio jack, and a fingerprint reader, which is actually quite useful if you’re using it in conjunction with some encryption software to keep your data safe.

The IdeaPad K2 runs Android 4.0 Ice Cream Sandwich, and just as is the case with other Lenovo tablets, it features a custom interface – an updated one, with tiles for widgets, sort of like Windows Metro UI. It looks pretty good, although some may prefer the original Android user interface.

The tablet is confirmed to be launching in China in the following months, but there’s no word on whether it’s coming to the US or Europe anytime soon. It better be coming sooner rather than later, because the competition is pretty fierce, and if Lenovo gets into the game now, they might still have a chance.