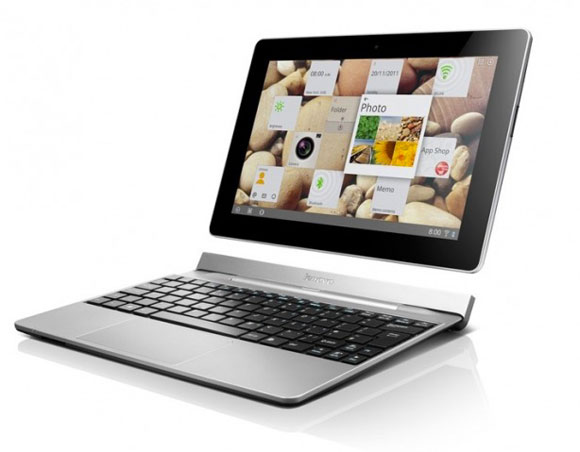 Lenovo has had a great start of the year in 2012, having announced and released quite a few new devices, and alongside with their new laptops and Ultrabooks, they’ve also announced a couple of tablets. The IdeaPad K2 and S2 are the successors to the first models that were released last year (the latter only in China, sadly), and they both look like an attractive option for their respective markets.

While the K2 is more of a high end business-oriented slate with a quad core processor, fingerprint reader and all that, the IdeaPad S2 is a consumer tablet with a small detail that should make it more attractive in the eyes of a potential buyer: it has a keyboard dock, just like the Asus Transformer Prime (practically making it a direct competitor). But can it compete with the current flagship tablet?

Just so we’re clear, we’re talking about the 10 inch S2 – there was another prototype at CES 2012 with a 7 inch display, and that will undoubtedly cause some confusion, although the specs are pretty similar, so if the smaller model gets released, you’ll have to choose just by display size.

The IdeaPad S2 has a fairly standard design, with the display on the front, surrounded by a chrome frame, and a nice matte back cover with the Lenovo logo in the middle. The resolution of the 10.1 inch display is 1280×800 pixels, which is certainly enough for most apps, but there were rumors that Lenovo might be going with a Full HD display for the final model – that would be very nice, indeed, and it would help the tablet compete with the newer Transformer Prime 700 series. The whole tablet is

The IdeaPad S2 is powered by a dual core Qualcomm Snapdragon, running at 1.5 GHz… BUT WAIT, this is no simple Snapdragon – it is actually Qualcomm’s new 4th generation Krait platform, which is much faster than the previous chips and should be able to compete with the quad core Tegra 3 on equal grounds, at least in some applications.

The Krait Snapdragon has a 1000 MHz dual channel (DDR2) memory interface, the new Adreno 225 GPU and a handful of improvements to the original architecture to make the increased performance possible. Seeing as most of the current apps and even Android itself is still pretty bad at managing multiple cores, the higher-clocked Krait will probably be even faster than the Tegra 3 in the beginning. The 1 GB of RAM also helps keep things smooth when multitasking.

Now, for the other surprise that comes with the IdeaPad S2 – the keyboard dock. This optional accessory turns the S2 into a small netbook, very similar to the Transformer Prime, doubles the battery life from 10 hours to 20, and adds more expansion options, as well (2 USB ports, a micro USB port, micro HDMI out and an SD card slot, to be precise). Just as is the case with Asus’ tablet, you’re probably going to want to get it for the best experience.

It goes without saying that the Lenovo IdeaPad S2 ships with Ice Cream Sandwich pre-installed, and of course, it has a customized interface running on top. It’s not that bad, and some people might actually prefer it to the original Android 4.0 UI, but I really hope it’s not buggy and prone to crashes like so many other custom skins on the market.

The tablet will come in 16, 32 and 64 GB versions, and it has a 5 megapixels camera on the back with support for 1080p video recording, plus a smaller 1.3 camera on the front for video calls. It has all the other standard issue features, as well – Wifi, Bluetooth, GPS, DLNA, 3.5 mm audio jack are all present and accounted for.

The Lenovo IdeaPad looks like a winner, and it can definitely compare with the Transformer Prime, but it would be nice if Lenovo and/or Qualcomm could get more coverage for the processor – everybody seems to think that it’s much more inferior to the quad core Tegra 3 (that may be the case for older chipsets, but not for the Krait, that’s for sure). If the pricing is right, it should be a great purchase, especially considering Lenovo’s quality.