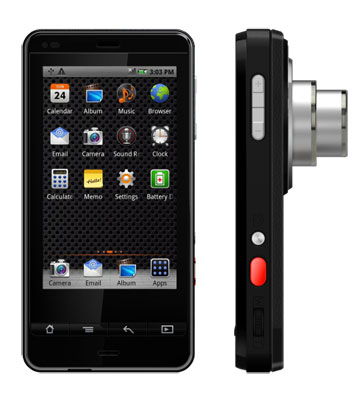 Polaroid is well known to camera enthusiasts and pretty much everyone else around the world – their instant developing photo film was very popular a few decades ago, but ever since the digital age came by, they’ve been mostly forgotten and struggling to get by. Unbeknownst to most people, they actually tried getting into the tablet market, but their device wasn’t very popular (mostly due to lack of coverage and interest).

But now they’re taking another shot at the mobile market, and this time they’re sticking with what they know best… more or less: the company’s new product is the SC1630 HD Smart Camera – basically a point and shoot camera with an integrated smartphone.

The SC1630 looks quite different than other smartphones, especially when you use it as a camera. The whole device is thicker than your average phone – at 18.5 mm, it feels almost like you’ve reverted back to the pre-iPhone era, but that’s the price you pay for a working optical zoom. Yes, this Polaroid has an extensible lens with a 3x optical zoom, which is not much, but good enough for when you really need to zoom in on a subject.
The front of the device (or should I say back?) has a 3.2 inch display with a respectable 800×400 pixels resolution, and four navigation buttons for Android right below it, while the back (front?) has the huge lens housing and a Xenon flash. The back also has a nice leathery texture to it, which feels and looks pretty good.

The SC1630 is a pretty good smartphone and camera, all things considered. The sensor is a 16 megapixels unit, and the lens has an aperture of F3.1-F5.6, 3x optical and 5x digital zoom, a shutter speed of 1/1400 and 3200 ISO – better than any other smartphone on the market, but obviously lower than even the least expensive dedicated point and shoot cameras. There’s also support for 720p video recording, and I bet it’s much better than other phones because of the bigger lens.

The Polaroid SC1630 makes up for that with pretty decent smartphone hardware – there’s a 1 GHz single core processor under the hood, with 512 MB of RAM and 512 MB of storage space. The actual photos are supposed to be stored on the micro SD card that the user buys, so you better get a fast one if you plan on shooting full size photos or continuous HD video. Among the phone’s hardware features you can count the standard Wifi and Bluetooth adapters, micro USB port, an assortment of sensors, and a 3.5 mm audio jack – strangely, there’s no GPS or HDMI out port.

The Polaroid SC1630’s main feature is the Android OS – indeed, this smart camera uses the OS as a base for everything. The camera app is a custom version with more features, but you can find something even better on the Android market if you want. There’s no word on the version of Android used, but I guess (and hope) it’s Gingerbread – using Froyo would be a real deal killer. Obviously, you can’t expect an Ice Cream Sandwich update for this phone, but hope never dies :-). Overall, the Android interface is pretty standard – nothing much has changed aside from Polaroid’s custom apps.

The Polaroid SC1630 will come to stores this spring, in April to be precise, at a cost of $299 with a contract – that’s pretty high for a smartphone, even one with such a good camera. If you need to take a lot of photos and absolutely can’t afford to carry a separate camera, I suppose the phone may be useful, but it really isn’t the best hybrid device otherwise.