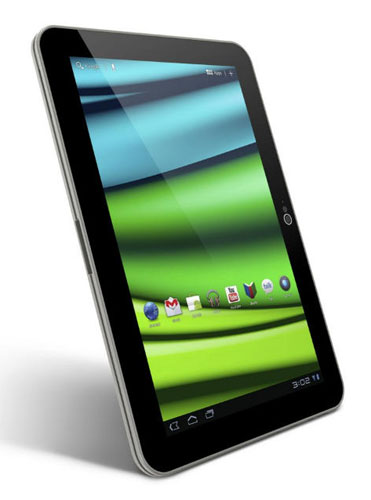 Toshiba’s foray into the tablet market wasn’t as successful as some people thought it would be, with the Thrive failing pretty hard, even though it had a lot of great features (like a full size USB and an SD card reader). The reason for the failure was mostly the marketing – or more precisely, the lack of it – Toshiba really didn’t advertise the Thrive a lot, and it kind of surprised everyone when they started seeing it on sale in stores (that says a lot about the competence of the PR team).

But Toshiba is trying again, and this time they’re going for style instead of practical design, with the Excite X10, which is currently the thinnest tablet in the world, but even with a 10.1 inch display, it’s very sturdy and it doesn’t flex at all, despite what you may imagine.

The reason for the sturdiness is the all metal unibody housing, which also looks very nice, as well. This construction also allows the Excite X10 to be only 7.7 mm slim, which is a whole 1.1 mm thinner than the iPad 2 – pretty remarkable if you ask me. The weight is also lower than the iPad 2 at only 535 grams – how Toshiba managed to achieved this, I will never know. Despite the thinness, the battery life is still supposed to be about 8 hours of continuous video playback – whether that’s true or not remains to be seen in real world usage.

There’s nothing on the back besides the camera and the relatively big Toshiba logo in chrome letters. The brushed metal finish looks great and I don’t think it will ever get old (making the Excite 10 a sort of “timeless piece”). The front is adorned by the 10.1 inch IPS display with a 1280×800 pixels resolution, which has great color reproduction and contrast, as well as a pretty decent brightness that should make it possible for the device to be used outdoors without much trouble.

The performance of the Toshiba Excite X10 doesn’t come close to the new Tegra 3 or 4th generation Snapdragon, but the good old TI OMAP 4 chipset inside the tablet should provide more than enough processing power to run any kinds of apps and games for at least the next year or two. The processor runs at 1.2 GHz per core, and with 1 GB of RAM and the PowerVR SGX540 graphics adapter, you definitely won’t have to worry about lags or slowdowns.

The other hardware specs are all you would expect from a decent tablet – there’s the Wifi N and Bluetooth adapters, GPS radio, a 2 megapixels front facing camera and a 5 megapixels one on the back, micro USB and micro HDMI ports, a selection of various sensors and more. There’s no micro SD card slot, though, so you’ll have to make do with the 16 or 32 GB model, which will cost you $530 and $600, respectively.

The Excite X10 will run Android 4.0 Ice Cream Sandwich out of the box, with a few of Toshiba’s customizations, but nothing you couldn’t handle. The overall look and feel of the OS remains the same as a default installation.

The tablet is supposed to be available by the end of winter, and it will be interesting to see how it fares. I hope Toshiba does some more extensive marketing instead of ninja-ing it to stores and expecting people to just buy it.