Trending
You are at:Home»Tablet Reviews»Apple’s new iPad vs the Asus Transformer Pad Infinity – how do the two flagship tablets compare
By Gadgetman on Mar 28, 2012 · Tablet Reviews 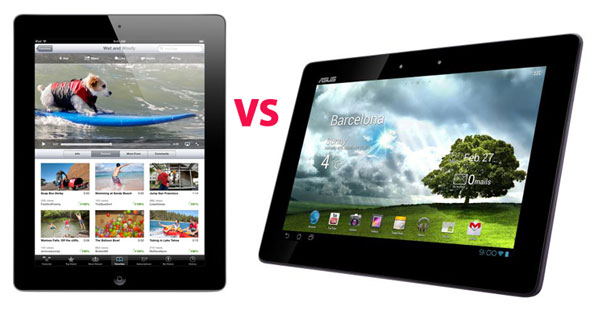 Apple’s new iPad is selling like hot cakes (just like its predecessors, although the huge gray market may be responsible for eschewed US sales numbers), and it looks like it will be the mainstay tablet from Apple for at least the next 12 months or so. The improvements may not be that major, but seeing as a tablet is pretty much made of 80% display, 20% other hardware, the Retina Display alone makes the new iPad one of the best choices for the average user.

Obviously, Android tablets will have to step up their game, and we’re already seeing it happen. It’s pretty much a given that Android tablets surpass the iPad in performance, but now they have to compete with an amazing display that actually makes a big difference in usability. One of the best competitors to the new iPad right now is the Asus Transformer Pad Infinity, which has taken the place of the Transformer Prime as the top dog on the Android tablet market, bringing extreme performance, a slew of features, an attractive design and of course, a high resolution display.

So how does it stand up to the new iPad?

Pretty well, I’d say! While the Transformer Pad Infinity still loses to the iPad in display quality and battery life with its 10.1 inch, 1920×1200 pixels Super IPS+ screen and 25 W/hr battery (compared to 42.5 W/hr), it’s still very close to it and it’s actually better when it comes to performance.

Still, the two tablets are so close in overall performance and display quality that you’ll have to choose based mostly on the operating system and exterior design. The design of the new iPad is a perfected version of the two previous models, and it looks quite nice with its aluminum housing and ultrathin 9.4 mm profile. The front is covered with a big sheet of Gorilla glass, so you won’t have to worry about scratches or dents for quite a long time, even if you use the tablet extensively.

The Asus Transformer Pad Infinity has its own distinct style, but overall it’s pretty close to the new iPad design-wise. It’s got pretty much the same construction with the metal housing covering most of the device and a Gorilla Glass 2 sheet covering the front. The back has an attractive radial finish that looks great, especially in direct light (it’s so shiny!), but the plastic strip on the back slightly breaks the overall style (it does improve the reception signal, though).

The main specs are listed below, for easy comparison. As for the other hardware features, well they’re pretty much the same – both tablets have the usual Wifi N, Bluetooth 3.0 EDR, GPS, gyroscope, accelerometer, magnetometer, proximity and light sensors and other stuff. The Transformer Pad Infinity also has the optional dock, which is very well designed and built, but really, if you want to turn your tablet into a netbook, the iPad also has a lot of great third party docks that can do pretty much the same thing.

Overall, both tablets are a great choice, and if you don’t care for the most performance, the choice is down to the OS – Android 4.0 Ice Cream Sandwich looks and works amazingly well, but so does iOS 5.1 – the latter is easier to use, though.

The Apple iPad is already on sale, while the Asus Transformer Pad Infinity is yet to be released, so the iPad definitely has an advantage for now.