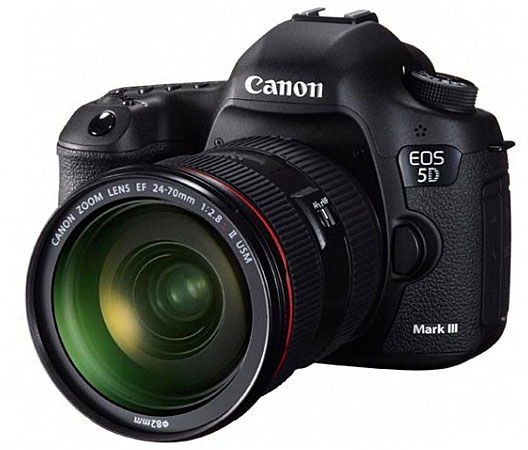 For those of you who don’t know EOS 5D, it’s an entire line of professional DSLRs first released on 2005. The original EOS 5D was a full-frame SLR, affordably priced for eager photographers. Its powerful 24x36mm sensor had professional applications but its relevance was questioned back then. An upgraded EOS 5D Mark II was announced in 2009. It was the first SLR capable of recording full HD videos and became an instant hit among indie film makers.

Canon Rumors was first to start the buzz about 5D Mark III when they leaked photos of an event setup in Paris, Shanghai, and Singapore. Within hours after the rumor broke out, the moment of truth arrived. Canon announced EOS 5D Mark III and revealed its specs to us.

5D Mark III has the same 61-point High Density Reticular AF System found in more expensive Canon DSLRs, namely EOS-1D X. It is the best SLR AF system Canon to date. The AF system is complemented by iFCL metering to ensure exposure levels are stable with each shot even if the light source changes. Other features include multiple exposure mode, HDR mode, and comparative playback. Here’s an overview of its notable specs:

Canon EOS 5D Mark III may have high-end features but it has a compact and light-weight body, making it easy to carry around. It’s not as weatherproof as EOS -1D camera series but weather resistance is better compared to EOS 5D Mark II. You can use it under rugged conditions as well.

Gaskets and seals were tightened to improve its resistance to dust and moisture.
The camera body will retail for $3500.