Trending
You are at:Home»Tablet Reviews»How does the new iPad compare to the iPad 2?
By Gadgetman on Mar 15, 2012 · Tablet Reviews

Apple’s new iPad is finally here and it brings a lot of features that the fans expected, although it’s definitely not the next revolution in tablets and mobile computing (with a tactile display, next generation NFC, quad core processor and other stuff) as some people speculated. 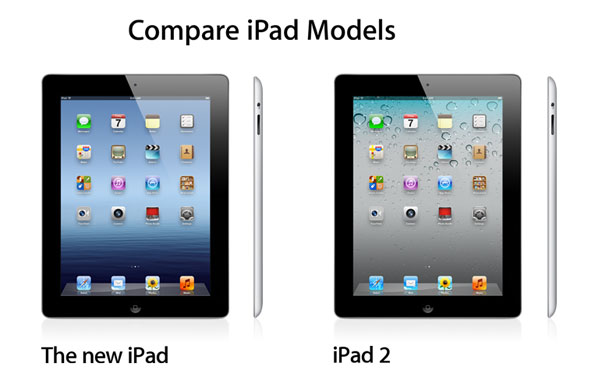 It’s still a very nice tablet – one of the best on the market, in fact, and I have no doubt it will do well in sales and be popular with the users. But is it worth upgrading to if you already have the iPad 2? Let’s compare the features and functionality of the new iPad with the iPad 2 to find out.

The exterior design of the new iPad is pretty much identical to that of the iPad 2 – the two devices have the same overall style and look, with the only differences being the thickness (the new iPad is thinner by half a millimeter), weight (the new iPad is heavier by 50 grams) and the slightly more rounded edges on the new iPad, which isn’t that noticeable in everyday use. Aside from these small changes, it’s really easy to mistake the iPad 2 for the new iPad and vice versa – there’s nothing different on the front or back that would give away either one of them.

The biggest changes in the new iPad are on the inside – you start noticing the upgrades once you turn the device on – the new IPS LCD display with a 2048×1536 pixels resolution is simply amazing. It’s just like looking at those new 4K TVs, only you know, smaller. At 264 dpi, the pixel density is high enough for it to be called a Retina Display, which is what Apple indeed does. Doubling the pixel density of the screen no doubt took a lot of engineering, but the results speak for themselves: the picture clarity, sharpness and the colors are unbeatable. The brightness is also on a high level to illuminate the screen in any conditions. Compared to the new iPad, the iPad 2 with its 1024×768 resolution truly looks second rate (just like the iPhone 3GS did when the iPhone 4 came out).

The second visible upgrade is the camera on the back – Apple implemented the same technologies used in the iPhone 4S, finally bringing high quality photos and HD video to the iPad. The camera has a 5 megapixels sensor, and thanks to the backside illumination, large aperture and new lens construction, the photos are great even in low light conditions, and of course, the new iPad supports 1080p video recording, as well. The iPad 2 has a 0.7 megapixels camera on the back, which was laughable even when it was released, so the new upgrade is welcome.

The storage space on both the iPad 2 and the new iPad are similar – depending on the model, you get 16, 32 or 64 GB, and the only other difference is the addition of a 4G LTE radio on the new iPad. In fact, it’s a world radio, with support for both GSM and CDMA networks, 3G, HSPA+ and 4G LTE on both AT&T and Verizon. That makes it easier to manufacture the tablet, while also allowing users to switch networks if they want (and if they get the unlock code).

The 4G LTE radio uses quite a lot of energy, so Apple also upgraded the battery from a 25 Watt-hour unit on the iPad 2 to a 42 Watt-hour high capacity battery on the new iPad. That’s impressive since the new battery takes pretty much the same amount of space inside the housing – hopefully other manufacturers will take notice of that. The battery life is still 10 hours on 3G and only 9 hours on 4G LTE, which is similar to the iPad 2.

The new iPad features a new chipset – the A5X from Apple, but it’s not as good as you’d expect. Everyone expected a quad core, but Apple chose to go with an updated dual core. The processor cores run at 1 GHz each, and while the performance is a bit higher in general use, it’s not noticeable to the user. The graphics performance, on the other hand, should be much higher and future-proof, thanks to the quad core graphics adapter, which is twice as fast as the previous solution. The 1 GB of RAM also helps keep things smooth, and will be better long term. However, at the moment, the difference in performance between the new iPad and the iPad 2 is minimal, at best.

The new iPad will start shipping by the end of March, and the pricing is the same as it was for the iPad 2 when it was released. If you want to go with the best and most future-proof device, the new iPad is a great purchase, but if you want to save some money, the iPad 2 is a perfect buy for the price, which got lowered by $100. If you don’t need to play the latest games or view video and pictures in HD resolution, the iPad 2 is still a great tablet, and if you own one, the upgrade to the new iPad is not going to make your experience that much better.