Trending
You are at:Home»Apple»List of apps optimized for the new iPad and its Retina Display
By Gadgetman on Mar 20, 2012 · Apple 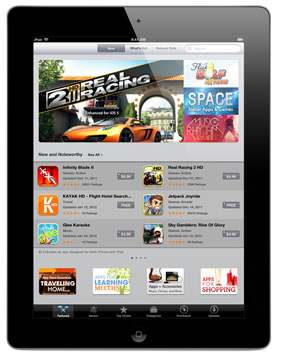 The new iPad is the only tablet that packs more than 500 pixels per inch of display. Until Samsung comes out with Galaxy Tab 11.6, it’s still the best tablet in terms of screen resolution. Even so, videos need to be in 1080p format to view them in full HD with Apple’s latest offering. iOS applications need to be optimized for Retina Display as well before people get to enjoy its “resolutionary” display. As of today, less than 50 apps are optimized for Retina Display. And with Apple selling more than 3 million new iPads worldwide, app developers better get to their working stations and push out updates soon.

Most apps optimized for the new iPad are games and news readers – which makes sense. These types of apps heavily rely on two design aspects – graphics and letters. When tested in the real world, Retina Display brings images and videos to life and makes words and letters finer and more crisp. The new iPad’s screen resolution turns already-beautiful apps to stunning. Besides these categories, some applications under photo and video, social networking, entertainment, books, reference, utility, productivity, sports, lifestyle, music, and finance were also optimized for the new iPad. For a comprehensive list of these apps, check out the list we made below. The list comprises of free and paid apps optimized for the new iPad’s Retina Display. Feel free to include any apps you find that are not on the list by leaving comments!