Trending
You are at:Home»Tablet Reviews»Apple’s new iPad vs the second generation Galaxy Tab 10.1 – Samsung bets on the price this time
By Gadgetman on Apr 19, 2012 · Tablet Reviews 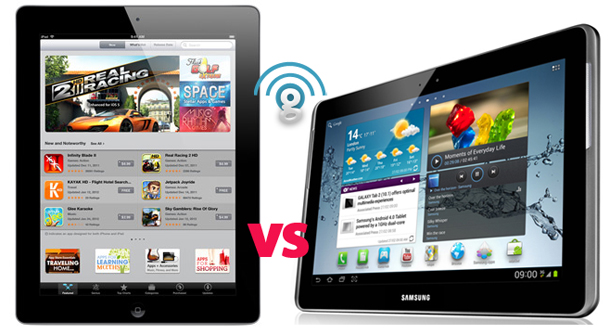 Apple’s new iPad is undoubtedly one of the best, if not THE best, choices when it comes to a tablet – the device has got everything you’ll ever need and more, with the best display on the market, period (and as you may know, the display pretty much makes the tablet).

But if you can’t afford the new iPad or want a tablet with fewer restrictions and more functionality and flexibility when it comes to the software, you’re looking at one of the many Android tablets that are flooding the market. The most well-known of them are Samsung’s Galaxy Tabs – and the latest model in the series, the Galaxy Tab 2 10.1 (yes, the naming is a bit confusing) fits right into the mid-range tablet niche with an affordable price tag and enough features to satisfy most people. But how does it compare to the new iPad?

Design wise, I’d say the iPad wins, but only because of its metal construction – the Galaxy Tab 2 10.1 comes really close with its matte gray plastic cover. The Galaxy Tab 2 is actually very similar, both on the outside and inside, to its predecessor, the Galaxy Tab 10.1, with the only visible differences being in the new back cover (the first 10.1 was glossy white) and the added thickness on the new model (9.7mm vs 8.6mm – obviously, Samsung realized that sturdiness is more important than super thinness). The new iPad looks pretty much the same as the iPad 2.

Both the new iPad and Galaxy Tab 2 10.1 are very similar when it comes to the hardware, as well. The performance in apps should be equal, seeing as both tablets use a dual core 1 GHz processor and 1 GB of RAM, but there will be a slight difference in gaming performance, especially in the newest games, with the iPad taking the lead with its new quad core GPU – the GeForce in the Galaxy Tab 2 is a bit behind in that regard. You can see the rest of the hardware features in the table below, but suffice to say that the iPad has an advantage with its HDMI out capability, 4G LTE modem (on the most expensive version, though) and 5 Megapixels back camera.

There’s not a lot to be said about the software on both tablets – iOS and Android are quite different, with the former being easier to use but less flexible for power users, while the latter has a steeper learning curve, but once you get used to it, you’ll find that it can do so much more and is more customizable than iOS. When it comes to the apps, both are pretty much the same – most of the popular apps are available for both platforms, so there’s no real difference there. 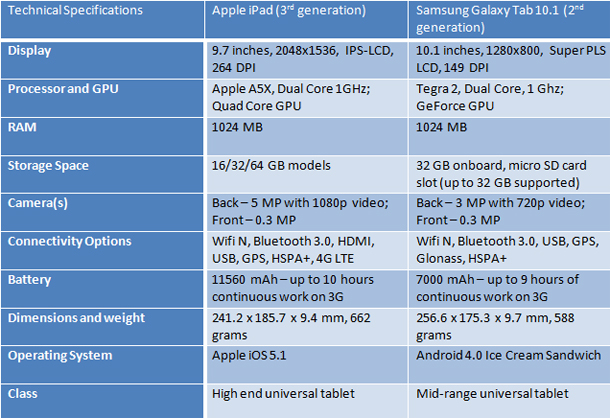 The new iPad’s pricing starts at $499, and that’s for a 16 GB tablet with no 3G modem, which is quite expensive compared to the $350 recommended pricing for the Samsung Galaxy Tab 2 10.1 – if you don’t need HDMI out and a better display, Samsung’s device is plenty enough, and a better choice for the price, but if you want to go all out, then obviously the iPad may be a better choice.