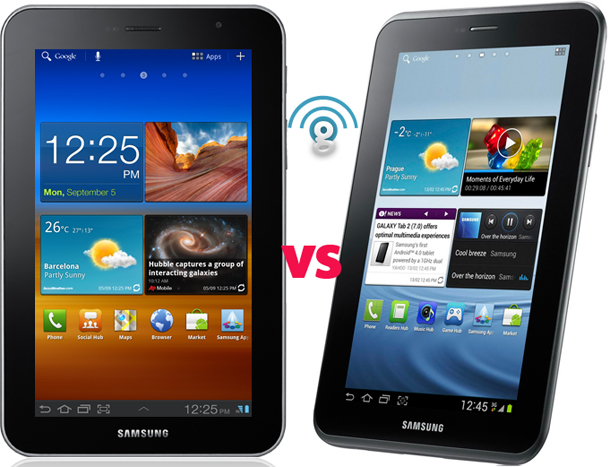 Samsung Galaxy Tab 7” was the first tablet ever to be released by the South Korean manufacturer. At this point, you have two choices when coming from it – you either upgrade to Galaxy Tab 7”” Plus, a 2011 release whose price is expected to drop soon; or Galaxy Tab 7”” 2.0, the official successor to Galaxy Tab 7””. Both are 7-inch variants and pack slight variations. We shall take a closer look at these two and break things down to software, design, hardware, performance, and battery life so you can batter decide.

Galaxy Tab 7” ships with Android 2.2 Froyo and is upgradable to 2.3 Gingerbread at most. At the time of its release, it was a better option than the tablet-optimized Honeycomb which lacked support for many apps. Samsung Galaxy Tab Plus runs Android 3.0 Honeycomb out of the box and has a stunning and more intuitive user interface. Honeycomb’s continued lack of app support is worrying but Samsung did promise an ICS update for it.

Ice Cream Sandwich offers the best support for apps and is shipping with Galaxy Tab 7” 2.0. ICS was developed to reduce fragmentation and gives you the option to download apps for most Android versions, including Honeycomb. ICS is also faster and has better UI than Honeycomb.

Samsung Galaxy Tab 7” falls short on design and feels more like a slab than a slate due to its hefty weight and thickness. It has four touch-sensitive buttons on the bottom panel which, although functional, were hard-to-reach when gripping on opposite ends during portrait mode.

The two most recent models are lighter at 345g and thinner, thankfully. Galaxy Tab Plus is the thinnest at 9.96mm followed by the 10.5mm second-generation Galaxy Tab 7”. Both models also let go of touch-sensitive controls in favor of on-screen navigation on the bottom left screen. Placement of physical buttons are similar across all three versions – with the volume rocker and button on the upper right, plus charging dock and dual speakers on the bottom. Plus and 2.0 have IRS blasters below the volume rocker too.

With regards to overall design, Samsung Galaxy Tab 7” 2.0 underwent the most changes with its gunmetal gray enclosure, smudge-proof faux-brushed metal accents along the edge, and curved design that tapers more gently towards the bezel. The original and Plus version almost look identical if it weren’t for the touch-sensitive buttons and faux-brushed “metal” backing – which really is plastic – that help distinguish the two.

WINNER: Galaxy Tab 7” 2.0 is the clear winner in this round. Not only is it designed with elegance but for comfort as well, even though it’s 1mm thicker than Tab 7” Plus. The real metallic back also feels more sturdy than the plastic backs of previous releases.

The 1024 x 600 TFT LCD is similar across all models. Samsung is probably keeping screen resolution at this level to prevent pricing from going shooting up. Specs like the 3-megapixel rear-facing camera, microSD card slot, and 4000mAh battery are common grounds too. All remaining hardware like the front-facing camera, internal storage, LED flash, processors, and RAM vary. To summarize, they have more differences than similarities.

Samsung Galaxy Tab 7” 2.0 doesn’t have a LED flash much to our dismay. The 3-megapixel shooter already delivers poor quality photos in dim places.

Without LED flash to improve or provide lighting, the second-generation Galaxy Tab can’t possibly take photos in the dark or provide quality shots in low-light settings. The front-facing camera was also downgraded to VGA, initially 1.3 and 2-megapixels on previous models. Unsatisfied with these major downgrades, Samsung managed to cut the 16GB internal storage on older versions – leaving only 8GB on Galaxy Tab 7” 2.0. Fortunately, they decided to be generous on RAM and kept it at 1GB just like Tab Plus. Galaxy Tab 7” only has 512MB RAM.

WINNER: Galaxy Tab Plus packs better hardware than the second version of Galaxy Tab 7”. If it isn’t any better, it only equals what Galaxy Tab 7” 2.0 has.

As far as performance and battery life are concerned, hardware and software affects them significantly. Under the same circumstances where medium is set to brightness, an active push email account is left on, 15-minute Twitter sync interval is activated, and WiFi, GPS, and Bluetooth are enabled, results in battery life are as follows:

We recommend Galaxy Tab 7” Plus the most – whether you’re planning to upgrade your original Galaxy Tab or eyeing the possibility of owning a 7-inch tablet this year. You may want to hold out until Samsung releases an ICS update though, just to be sure. But with a $420 value, Galaxy Tab 7” Plus may be too expensive for your taste. In this case, settling for the $250 Galaxy Tab 7” 2.0 is an option worth considering.