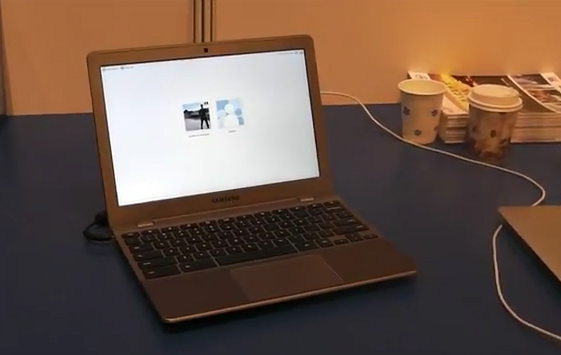 Samsung showed off a Chromebook prototype at today’s Intel Developer Forum (IDF) in Beijing. Samsung gave no word about its name, specs, or release date. All we know is that it boots faster than Series 5 Chromebook (not to be confused with Samsung’s Series 5 Ultrabook). The real question in everyone’s mind was whether it had an Ivy or Sandy Bridge processor since a Google code that emerged last week suggested support for both CPUs.

Netbooknews was first to cover the news and even took videos of Samsung’s upcoming Chromebook. After switching on the power button, it quickly booted to Chrome OS within 3 seconds – a significant improvement from Samsung Series 5 Chromebook which took 10 long seconds to boot. The unnamed Chromebook owes its fast boot speed to the changes Google implemented on Coreboot, the lightweight Linux-based BIOS which handles computer hardware. Initially thought to have an Ivy Bridge processor, a Google source later confirmed it was indeed powered by Sandy.

A week ago, a new Google code did point to the possibility of Chromebooks being powered by Intel’s latest processors. Coreboot received support for Cougar and Panther point, Intel chipsets that are normally part of Sandy and Ivy Bridge processors. Samsung’s IDF model confirms last week’s talk about a Sandy-based Chromebook. With Ivy Bridge bound to be launch on April 29, an Ivy-based Chromebook may be right around the corner.

Sandy Bridge, also known as Intel Core i5-2500, is not as fast as Ivy but definitely faster than Atom processors used in current-generation Chromebooks. At the same time, Sandy is able to match Atom’s idle power consumption levels while delivering quad-core performance whenever needed. Chromebooks would’ve been fast if it weren’t for their Atom processors but OEMs learned the hard way. By supporting Google’s lightweight Chrome OS with Sandy and Ivy processors, the future of Chromebooks shines brighter than ever.

Yesterday, Intel announced Ivy Bridge’s support for Retina Display. It would be most interesting to see Samsung come up with an Ivy-based Chromebook sporting Retina Display don’t you think? After all, Samsung is the manufacturer behind the new iPad’s crazy resolution.