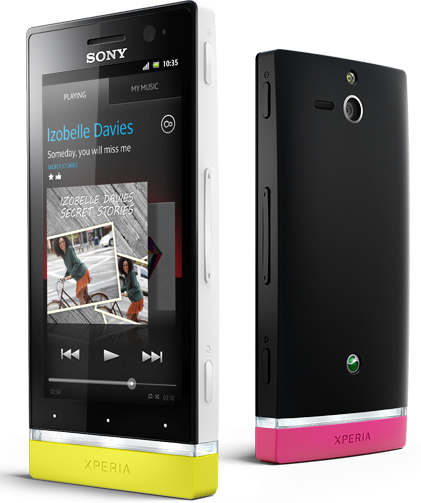 Sony Xperia U ST25i is an entry-level smartphone first announced at the Mobile World Congress last February. Because it’s shipping with Android 2.3 Gingerbread, we were less than pleased with it. That is, until Sony said it’ll be updated to Ice Cream Sandwich by summer. Specs sheet reveal what is really a midrange phone with a few high-end hardware. But Sony is selling it for a low-end price and that’s what makes it a catch.

A rectangular form, flat edges, blunt corners, and a slight curve to the back; these design factors make Xperia U feel right at home with Sony’s Xperia NXT lineup. But unlike Xperia P and S whose bodies are protected by aluminum shell, you have to put up with its plastic body. Despite this design downgrade, Xperia U shines brighter than them – literally. The bottom cap is swappable with other colors so you could style it based on your mood (or clothes) and the transparent bar lights up in different hues to match your display.

The right edge of the phone is home to three physical buttons for power, volume adjustments, and snapping photos with ease. That’s right. Sony Xperia U has a dedicated camera button. On top is a CTIA standard 3.5mm jack which makes it compatible with almost any headset. It has three touch-sensitive navigational buttons placed in between the transparent bar and display on the front panel, and a rear camera with flash on the back.

Sony Xperia U has a 3.5-inch screen similar to the iPhone. Incorporated on its average-sized screen is the mobile version of Bravia TV technology which gives off a vivid, jewel-like display. And while it is priced reasonably, you won’t believe it has a 1GHz dual-core processor under the hood – which, it does. The dual-core power gives it a clear advantage over competing smartphones which sell for the same price.

The rear end of Xperia U is marked by a 5-megapixel camera with autofocus and LED flash. Up front is a 0.3-megapixel front-facing shooter for making video calls. Again, the front-facing camera sets it apart from similarly priced handsets. It has a 512MB RAM, 2GB phone memory, and 4GB internal storage.

Unfortunately, there is no microSD card slot for expandable memory although the same could be said for the entire Xperia NXT lineup. Sound quality on speaker or headset is improved by xLoud and Sony 3D surround sound. Android 2.3 Gingerbread will be the initial firmware of Sony Xperia U but an ICS update is bound to be released by June 2012. The phone is updatable via Sony’s website and unlike competitors, carriers won’t get in your way. Below is a more detailed look at its specs:

Nothing should stop you from getting Sony Xperia U if you’re searching for a budget-friendly smartphone running Android. The phone is ahead of its time and sports midrange specs for a low-end price. Sony Xperia U is coming to Clove UK this May 7 for £170. In Euros and USD, that’s €208 and $273, respectively. If you’re willing to spend a few hundreds more, the midrange Sony Xperia P is NXT in line