Trending
You are at:Home»Tablet Reviews»The new iPad vs Motorola Droid Xyboard 10.1 – does Apple’s tablet fare better than their smartphone?
By Gadgetman on Apr 13, 2012 · Tablet Reviews 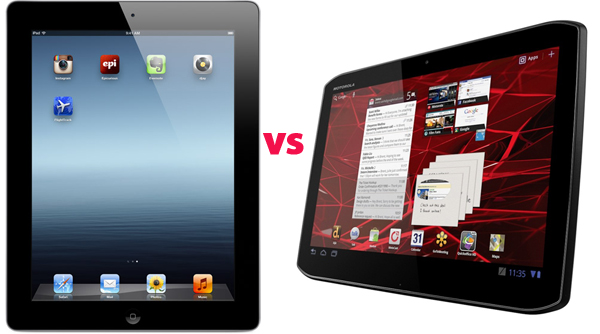 Apple’s iPhone 4 and 4S have been the best choice for those who wanted both performance and style in their pocket for a long time, and even though many competitors tried, they could never quite get the same combination right. That is, until Motorola released the Droid RAZR – this smartphone is easily one of the most stylish smartphones out there, beating the iPhone 4S and even the more expensive Prada Phone 3.0 in both design and hardware features, which is pretty darn impressive.

Motorola has also taken the design of the successful Droid RAZR and applied it to their newer tablets, as well – the resulting Droid Xyboard 8.2 and 10.1 slates are quite easy on the eyes. But can they, or more precisely the bigger 10.1 model, compete with the new iPad in style and function?

The Xyboard certainly looks unique, but unlike its smartphone prototype, it’s not made out of metal, so it feels a bit less premium than it could. It’s still pretty sturdy, with a Gorilla glass sheet on the front and nice rubber inserts around the back that make it easy to hold and work with, but it’s not as nice as the new iPad’s classy aluminum finish, so it kind of loses when it comes to the overall style.

The hardware of both the Xyboard 10.1 and the new iPad is very similar, although the new iPad has an edge when it comes to the most important features. For example, the 2048×1536 pixels display on the iPad is much better than the 1280×800 IPS unit on the Motorola, and the quad core graphics adapter provides a lot more performance in the latest games than the single core SGX540 – the 0.2 GHz increase in CPU clock speed in the Xyboard is nowhere near as noticeable. The other specs are pretty much the same – both tablets have the same features, right down to the 4G LTE radio and 10 hour work time on 3G networks (the iPad works longer on 4G LTE, though).

While the iPad comes with the very recognizable iOS out of the box (the latest 5.1 version), Motorola’s Xyboard features Android Honeycomb, with an update to Ice Cream Sandwich available right away. That’s not necessarily a bad thing, but the extra step is a bit annoying, especially knowing that the company could’ve just shipped the tablet with Android 4.0 out of the factory. 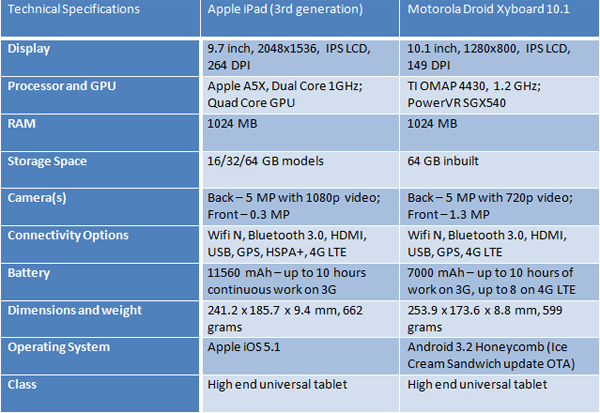 Both the Apple iPad and Motorola Xyboard 10.1 are already available on sale, with the pricing being similar for what you get, although the Xyboard is a bit cheaper spec-for-spec. The HD display on the iPad is worth the extra money though – it gives you a much better experience in pretty much every app and game. The Xyboard is a more practical choice, but overall, the new iPad trumps it – unlike the situation with the iPhone 4S and Droid RAZR.