With the announcement of the new iPad, Apple has decided to take not only on the tablets market (where they’re already the established leader), but also on the portable gaming consoles market, stating that the new iPad is a perfect replacement for those and is even better at playing games. It’s interesting to see if that is indeed true, and there’s no better portable console to compare the new iPad to than the Sony PlayStation Vita.

The PlayStation Vita was obviously designed from the grounds up as a gaming device, and it’s got all the usual components and buttons needed for the best experience. The slim profile makes it a bit harder to use in games than the previous models, but it’s plenty good for pretty much any game. The touch screen and accelerometer add new possibilities in games that were absent in the previous PlayStation Portable consoles.

The iPad is pretty much a perfect tablet – 90% display and 10% other hardware. Pretty much everything is done via the touch screen, but that actually doesn’t stop it from being a good gaming device. The big 9.7 inch display and slim profile (which is an advantage here) allow you to control games pretty well, although some action-oriented genres will suffer because you don’t have all the controls under your fingertips.

The hardware features are very similar on the PS Vita and the iPad – aside from the different OS and display, both devices share a lot of the hardware specs. Both of them have Wifi, Bluetooth, GPS adapters and USB ports, gyroscope sensors and dual cameras, but the iPad wins with its HDMI out capability (great for playing on the big screen using the tablet as a controller) and better main camera, which has a 5 MP sensor and supports 1080p video recording.

The performance of both devices should be similar in games, but the PS Vita would be faster in general use…. if it had a proper OS! Both the iPad and PlayStation Vita have a quad core GPU under the hood, so the performance in games should be similar, but the iPad has a dual core processor, while the PS Vita has a quad core one – that won’t really help it most of the times, as I said.

The iPad runs Apple’s iOS, and with access to over 500,000 apps on the iTunes Store and over 10,000 different games, there’s a lot you can do with the device. The PlayStation Vita uses the custom Vita OS, which is nice but doesn’t have nearly as many capabilities or third party support as iOS, Android or even Windows Phone 7. If you want games, you’ll have to rely on the small number of specialized developers, which are undoubtedly good, but then again, most of them release iOS and Android ports of the best games anyway. 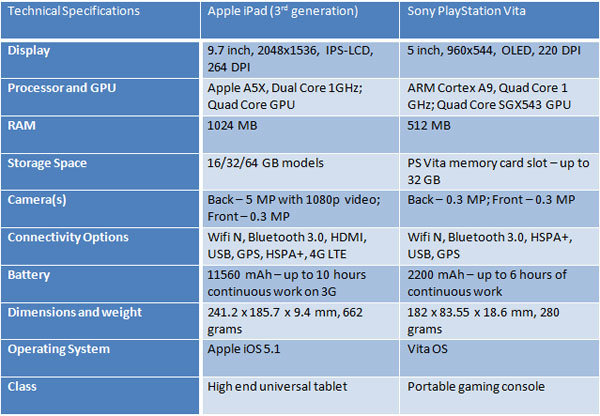 The PlayStation Vita is undoubtedly well priced – $300 will get you a fully equipped 3G/Wifi console with a memory card and a free game to boot. You’ll have to pay at least double that price for a 3G iPad.

Both devices are already available on sale, so the question is which one do you get? My answer is – the iPad if you want one device for everything, don’t play a lot of action games like Uncharted (which is also unique to the PS Vita, by the way) and want to be able to play legacy games, and the PlayStation Vita if you want the best portable gaming experience – the hardware buttons really make it better, but you would miss the great iPad Retina Display and the freedom in apps and functionality is offers.