Trending
You are at:Home»Tablet Reviews»The new iPad vs the Galaxy Note 10.1 – Apple and Samsung seems aim at slightly different markets
By Gadgetman on Apr 3, 2012 · Tablet Reviews 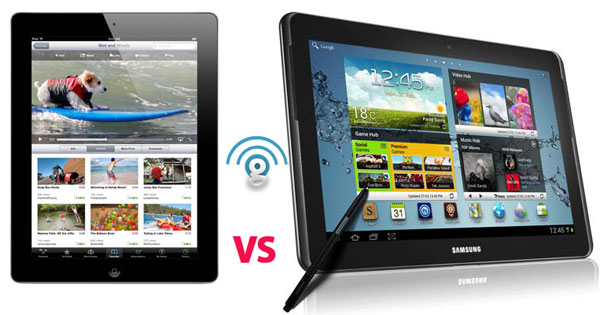 Apple’s newly released third generation iPad is already making waves around the world, selling over a million units in its first week – and the number just keep growing. Meanwhile, the competition isn’t slacking either – Asus has announced the Transformer Pad Infinity, which is faster than the new iPad and comes very close display-wise with its 1920×1200 unit, Acer has a new quad core tablet on its way and Samsung has released a slew of new slates, as well.

In fact, Samsung’s latest tablet, the Galaxy Note 10.1, is the most interesting – it is oriented towards those who need to take notes (as the name would suggest) and features a pressure-sensitive Wacom digitizer that can also be used for drawing. While the new iPad and the Galaxy Note 10.1 are after slightly different markets, they overlap a lot in functionality and are definitely among the best choices for a universal high end tablet – so which one’s the best?

Both the new iPad and Galaxy Note 10.1 looks and feel great, even though the latter has a plastic back. They’re sturdy and slim (at 9.4 mm for the iPad and 8.9 mm for the Galaxy Note 10.1), and should be easy to carry around without issues. There’s not much else to be said about the design – a tablet is 90% display, and that’s reflected in both the iPad and Galaxy Note, with a big display on the front covered with a Gorilla glass sheet for protection.

The hardware features are pretty much the same on both tablets, with the main difference being in the better display and main camera on the new iPad (for some reason, Samsung thought a 3 MP sensor would do fine), and the Wacom digitizer on the Samsung Galaxy Note. The latter means that you can use the tablet for note taking and drawing with a stylus, which is pretty comfortable. It can also be potentially useful for quick drawings in Photoshop when you don’t have a dedicated tablet available (there are ways, just Google them). That makes the Galaxy Note 10.1 worth considering if you’re an artist, but if you just need a good universal tablet, either one will do.

The performance will be higher on the Samsung Galaxy Note, thanks to its dual core Exynos platform, running at 1.4 Ghz – the A5X in the iPad at 1 GHz is slower, though not by much. The iPad has a better graphics adapter, though, which will perform better in games and 3D graphical applications.

Apple’s new iPad comes with iOS 5.1 from the factory, while Samsung’s Galaxy Note 10.1 uses the latest version of Android – 4.0 Ice Cream Sandwich. Both of these operating systems are perfect for any kind of use, although I have to say that the Ice Cream Sandwich user interface is more attractive and sophisticated than the simple icon based UI of iOS. 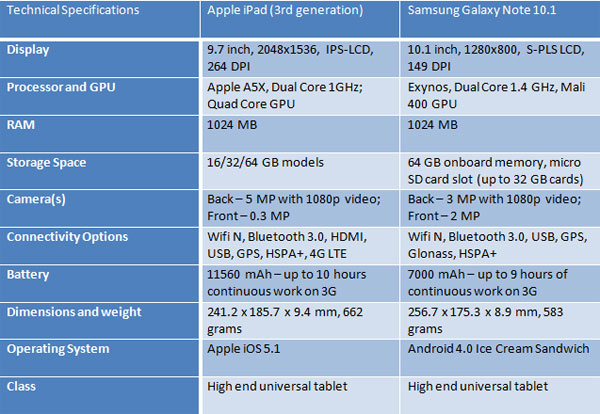 The new Apple iPad is already on sale, so if you want to get a tablet right now, it’s your best bet, but if you can wait a couple of months, the Galaxy Note 10.1 should make for a great competitor, especially if you need to take notes or draw. The pricing hasn’t yet been announced, but we’re expecting it to cost less than Apple’s tablet, which would make it worth purchasing.