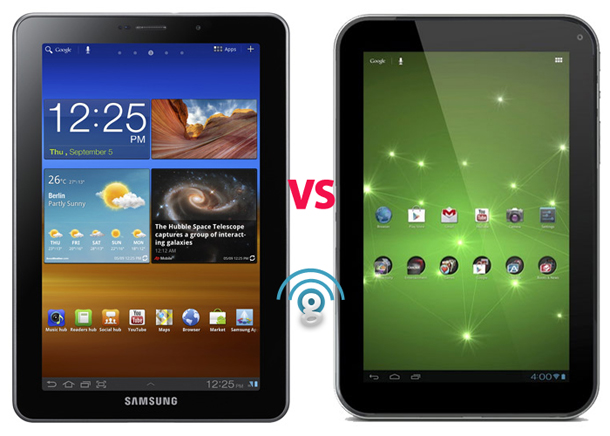 Last week, Toshiba has introduced a slew of new tablets, among which the 13 inch and 7.7 inch models are the most interesting. While the 13 incher is so big you literally can’t not notice it, the 7.7 incher is a direct competitor to Samsung’s Galaxy Tab 7.7. How do we know that? Well, how many 7.7 inch tablets can you count on the market? Exactly.

But the Toshiba Excite 7.7 has a few extra features that might actually make it a better choice than the older Galaxy Tab 7.7. Let’s see how they compare.

The Galaxy Tab 7.7 is one of Samsung’s flagship tablets, and as such, it looks great and is very well built. It’s made mostly out of metal, with a Gorilla glass sheet covering the display on the front. The Toshiba Excite 7.7 isn’t far behind – in fact, it’s very close to the Galaxy Tab’s design, with the same aluminum housing and Gorilla glass on the front. The Excite 7.7 has rounder corners and a different finish on the back, which is actually nicer than the Galaxy Tab 7.7, at least in my opinion.

The hardware features are similar on both tablets, although the Excite 7.7 a bit better – and it’s not only because the Galaxy Tab 7.7 is older. The most interesting thing is that Toshiba somehow managed to get Samsung to provide the AMOLED panel for their tablet – it isn’t Super AMOLED Plus with its impressive amount of subpixels, but it’s still more colorful and beautiful than any IPS LCD out there. That means either that Samsung doesn’t see the Excite 7.7 as threat (which is quite true – Toshiba is not the first brand to come to mind when you think “tablets”) or they have something even better coming up soon.

The Excite 7.7 has a 5 megapixels camera on the back, which is better than the 3 megapixels unit on the Galaxy Tab 7.7. The other specs are very similar, except for the Tegra 3 SoC in the Excite, with a quad core processor and 12 core GeForce graphics adapter, both of which are faster than the dual core Exynos and Mali-400 GPU in the Galaxy Tab 7.7.

Samsung’s Galaxy Tab 7.7 ships with Android 3.2 Honeycomb out of the box, but an OTA update to 4.0 Ice Cream Sandwich is already available for all users, so the tablet is similar to the Excite 7.7 in that regard. Another thing to note is the lack of any customization in the software on the Toshiba tablet, which is a good or bad thing depending on whether you like the default ICS interface or not. 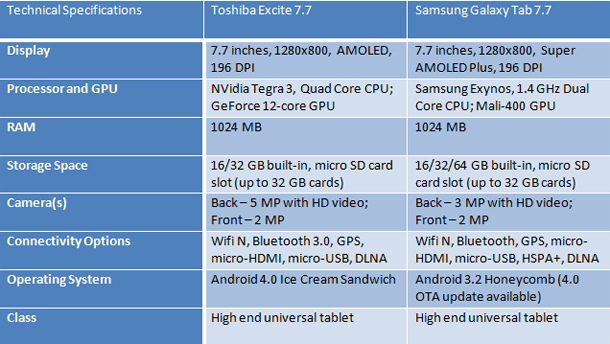 The Samsung Galaxy Tab 7.7 is already available on sale, and its price starts at $500 – the same price that Toshiba will use for the 16 GB Wifi version of the Excite 7.7 when it comes out. With both tablets being so similar, I’d go with the Samsung Galaxy Tab even if the Excite 7.7 was already out – the NVidia Tegra 3 is great, but it’s not that much faster in everyday apps than the dual core Exynos 1.4 GHz, and the Super AMOLED Plus display on the Samsung is a bit better. If you want a better camera and the fastest processor possible, the Excite 7.7 is a great choice – better than any other 7 inch tablet, in fact.