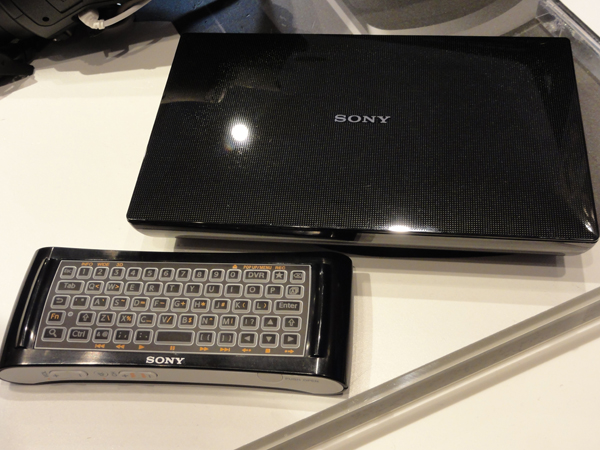 Sony flaunted a prototype of an Android-powered internet box two months ago at a Bravia TV Event in Singapore. The unnamed device was touted to turn “dumb” TVs to smart ones by equipping them with Smart TV features including access to the internet. Fast forward to today, Sony and Google together make it official as a Google TV set top box that comes with a dual-sided remote.

The remote doesn’t come close to the original Logitech Revue and that’s a good thing. Revue lacked portability anyway since it was the size of a full keyboard. The controller that comes with Sony’s Google TV box is about the size of your typical remote which makes it easy to carry around. If you are worried about it feeling awkward to the grip – like the remotes used in Sony TVs – you’ll be relieved to know it has the contour of a game controller. That means you can comfortably grip it with both hands, something you need to do since it has a QWERTY keyboard on its flat side. On its curved side is a custom TV controller complete with a touchpad. Sony could’ve done better on the design department but we have to credit them for coming up with a portable and easy-to-grip remote.

The main device has a more modern look even though it’s just a plain black box with a glossy finish. It’s thin and compact, with all ports hidden on the back. There are separate ports for HDMI IN/OUT, a digital out optical, IR blaster, and LAN. Also hidden from plain sight are two USB ports and AC IN for power. Sony will launch the Google TV box this summer. Now that they’ve finally made the Smart TV upgrader official, we can expect its full features to be detailed in the coming weeks.