Trending
You are at:Home»Tablet Reviews»Acer outs the next generation of Iconia Tabs – the A210 and A110 certainly look impressive
By Gadgetman on Jul 9, 2012 · Tablet Reviews 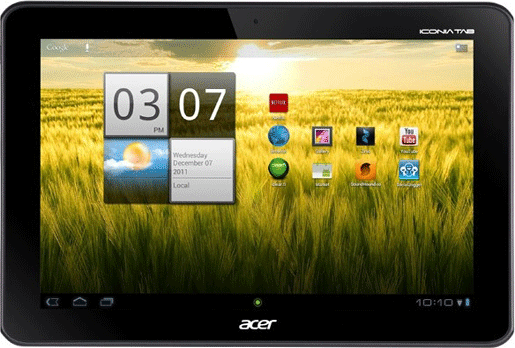 Acer’s tablets have all shown a great combination of hardware features, performance, build quality and price, making them one of the best choices for anyone wanting a well-built, affordable tablet that can run anything you can throw at it.

Although the company’s Iconia Tabs aren’t as popular as the iPad or even Samsung’s Galaxy Tabs, they’re still working on keeping and expanding their share of the market, and their latest releases will help them get a bigger portion of the lower end niches: the Iconia Tab 210 and 110 are a pair of affordable, high performance tablets that can fit anyone’s needs.

The Iconia Tabs A110 and A210 are both very similar on the outside – both of them have the same overall design and build quality. While they’re mostly made of plastic, with the obligatory scratch-proof glass covering the front, they feel very sturdy and it’s unlikely that you’ll break them, even if you intend to use them in the field. The only major difference between the A110 and A210 is the size, of course. There’s really nothing special about the tablets’ design – they’re just about the most bland looking slates (not in a bad way, though) you can find on the market.

The hardware features of both the Iconia Tab A110 and A210 are very respectable, although Acer did have to make some trade-offs in order to keep the price low while still using the latest processor available. The biggest drawback is the display: the 7 inch LCD unit on the A110 has a 1024×600 resolution, while the 10.1 incher on the A220 uses the standard 1280×800 resolution, and both of them have a very bad daylight visibility and pretty abysmal viewing angles. If you look at them from the front, the colors and picture are OK, but it degrades significantly when viewed from an angle.

The other specs are decent, though. Not only are both Iconias fast thanks to the quad core Tegra 3 processor and a full 1024 MB of RAM, but they also have all the other features you’d expect to find on a tablet, including a micro SD card slot (as well as 8 GB of onboard memory), Wifi N, Bluetooth 3.0, GPS, all the usual sensors and HDMI out. The A220 even has a second, full-sized USB port, making it easy to use any accessories. Both tablets lack a camera on the back, but there is a 2 Megapixel front-facing camera with support for 720p HD video.

Being new upcoming tablets, the Iconia Tab A110 and A220 will of course ship with Android 4.0 Ice Cream Sandwich pre-installed. Acer will leave the interface and default apps of ICS alone, which means that users will get the true Android experience as intended by the original developers. Of course, there will most likely be no locked boot loader, so custom ROMs will make the tablets even better and faster – always a good thing.

There is still no official confirmation of the release date of either tablet, but we know that the A110 will cost under $200 – a great price for a quad core tablet that can rival the Transformer Infinity. The A220 will be more expensive, although not by much – it’s expected to cost under $300. This will make the Iconia Tab A110 and A220 two of the best choices for budget conscious buyers.